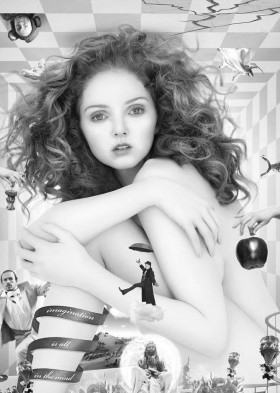 The Imaginarium of Doctor Parnassus
The Imaginarium of Doctor Parnassus is a 2009 fantasy film directed by Terry Gilliam and written by Gilliam and Charles McKeown. The film follows a travelling theatre troupe whose leader, having made a bet with the Devil, takes audience members through a magical mirror to explore their imaginations and present them with a choice between self-fulfilling enlightenment or gratifying ignorance.
cinema full

DIM’ is a music video based on the footage from the pilot episode of FJER, a poetic and freaky urban fantasy web series about the young bird-woman Crane’s emancipation from her father, ruler and lover Hawker.

Spring Summer 2019
Quinn’s clothes conjure a couture fantasy, with unabashedly extravagant shapes and lavish embellishments. This season the look veered between thigh-grazing confectionary frocks and a more dramatic voluminous silhouette that tumbled to the ground and swept the floor. The floral cocktail dresses of last season were even frothier this time around, bold in the shoulder and replete with handfuls of bows along the sleeves. If that sexy, legs-for-days line evoked frivolity, then the longer, grander gowns readdressed the balance.
FASHION LONDON

Satyricon
Fellini Satyricon, or simply Satyricon, is a 1969 Italian fantasy drama film written and directed by Federico Fellini and loosely based on Petronius’s work Satyricon, written during the reign of Emperor Nero and set in imperial Rome. The film is divided into nine episodes, following Encolpius and his friend Ascyltus as they try to win the heart of a young boy named Gitón within a surreal and dream-like Roman landscape.
The film opens on a graffiti–covered wall with Encolpius lamenting the loss of his lover Gitón to Ascyltus. Vowing to win him back, he learns at the Thermae that Ascyltus sold Gitón to the actor Vernacchio. At the theatre, he discovers Vernacchio and Gitón performing in a lewd play based on the “emperor’s miracle”: a slave’s hand is axed off and replaced with a gold one. Encolpius storms the stage and reclaims Gitón. On their return to Encolpius’s home in the Insula Felicles, a Roman tenement building, they walk through the vast Roman brothel known as the Lupanare, observing numerous sensual scenes. They fall asleep after making love at Encolpius’s place. Ascyltus sneaks into the room, waking Encolpius with a whiplash. Since both share the tenement room, Encolpius proposes they divide up their property and separate. Ascyltus mockingly suggests they split Gitón in half. Encolpius is driven to suicidal despair, however, when Gitón decides to leave with Ascyltus. At that moment, an earthquake destroys the tenement.