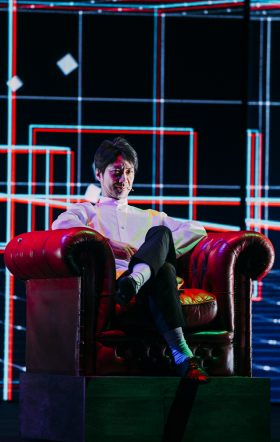 MANSAI: Kaitai-Shinsho No.30 Special Edition “5W1H”
5W refers to the five interrogatives; “When, Where, Who, What and Why”, while 1H refers to the interrogative “How”. In this work, Manabe attempts to encode humans’ attitudes to these six enquiry words in an effort to explore the primitive roots of interpersonal expression, and illuminate the fundamental sources of human behavior. By converting such factors into numerical information, while drawing also on analog thinking, the piece is a search for further understanding human nature.
.
Planned by Mansai Nomura
Visual Design/Technical Direction：Daito Manabe＋Motoi Ishibashi＋Rhizomatiks Research
Music: Daito Manabe + Hopebox
Cast: Mansai Nomura, Yuichi Otsuki, Mansaku no kai 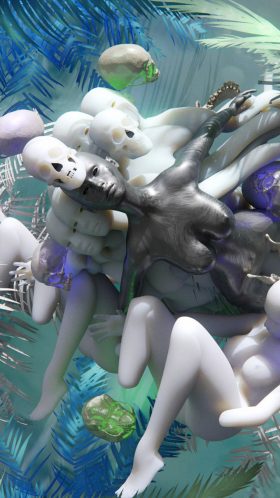 Computer Visions 2
After more decades of trying to construct an apparatus that can think, we may be finally witnessing the fruits of those efforts: machines that know. That is to say, not only machines that can measure and look up information, but ones that seem to have a qualitative understanding of the world. A neural network trained on faces does not only know what a human face looks like, it has a sense of what a face is. Although the algorithms that produce such para-neuronal formations are relatively simple, we do not fully understand how they work. A variety of research labs have also been successfully training such nets on functional magnetic resonance imaging (fMRI) scans of living brains, enabling them to effectively extract images, concepts, thoughts from a person’s mind. This is where the inflection likely happens, as a double one: a technology whose workings are not well understood, qualitatively analyzing an equally unclear natural formation with a degree of success. Andreas N. Fischer’s work Computer Visions II seems to be waiting just beyond this cusp, where two kinds of knowing beings meet in a psychotherapeutic session of sorts[…]