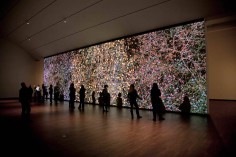 Digital artist Jennifer Steinkamp’s first installation in a series at St. Louis’ Contemporary Art Museum is up and running, transforming the museum’s facade into a projection screen for large-scale video art. Steinkamp’s installation, Orbit, features trees, vines, and other plants whipped up by turbulent wind. AN brought you images from the work back in October, but take a look at the newest video of the project below.
.
.
.
.
.
.
.
source: switched

“Computers always want to be annoying,” says Los Angeles-base artist Jennifer Steinkamp, as we discuss the installation of her current solo show in New York. She has ample reason to to worry about technology, given that her chosen medium — 3-D animation — is entirely computer based. Still, she takes the glitches in stride, as natural consequences of reliance on the digital. “It’s just annoyances, like mosquito bites or something,” she says. “Technology can always solve it.”

We had a chance to speak with the 20-year veteran of 3-D art at the newly opened W New York – Downtown hotel, which served as a both a site-specific installation and a preview of her exhibition at Lehmann Maupin gallery. For the W, Steinkamp projected one iteration of her recent series ‘Premature’, an expanse of abstract, meat-textured tubes vibrating, slithering, and undulating across the 60-foot-wide façade of the Manhattan hotel. In conjunction with the kickoff of New York Fashion Week, the W event was co-hosted by designer Narciso Rodriguez, a “big fan” of Steinkamp’s who has drawn inspiration from her work for his own. (Check out videos of the W installation and the Lehmann Maupin show after the break.) Steinkamp has other celebrity fans, as well. Her work was commissioned by Valentino for the Spring/Summer 2010 haute couture show in Paris, and she contributed projections from her 1998 work ‘Sun Porch Cha-Cha-Cha’ for U2’s Elevation Tour. The piece used for the Valentino show was much more representational than her earlier abstract work, and like another piece (from the ‘Orbit’ series) displayed on the inside of the W Hotel lounge, featuring swirling tree branches, falling leaves and swaying flowers.

After the late 1980s, Steinkamp — who exclusively uses Autodesk Maya 3-D animation software to create her signature style — worked with very abstract imagery, inspired in part by digital art pioneers like David Em. These psychedelic, almost op-art projections gave way to immersive installations of landscapes that exist somewhere between science fiction and a mushroom trip, like ‘Mar Vista’ (2002) and ‘The Wreck of the Dumaru’ (2004). Interested in the way that a space can be modified or even dismantled by a projected image, Steinkamp worked at transforming the viewer’s relationship to the architecture around them.

Her most recent series, ‘Premature,’ now on view at Lehmann Maupin, is more of a retreat to her earlier work. “It’s kind of this ambiguous state between representation and abstraction,” she says. And indeed, ‘Premature’ seems to reference both her initial forays into abstraction and the sort of primordial soup of slithering, fleshy forms of the new work itself. (Interestingly enough, she utilized a marble texture to create the sinewy forms in the ‘Premature’ series.)

‘Premature’ strikes the viewer as drawing itself in space, reaching either toward an evolution or a regression in time. Evolution, though, may be more accurate, as Steinkamp noted that she’s flirted with the idea of working with animations of animals of the future, perhaps completing some kind of otherworldly life-cycle from pure abstraction to landscape, from flora to viscera. Or it could signify decay, a movement away from timelessness and toward mortality.

But the thought of animating an animal is somewhat daunting, as Steinkamp — who does all of her animations herself, taking many months to complete a single piece — continues to explore the possibilities of Maya. “I’m probably one of their oldest users!” she laughs, but noting that “you can never know the software thoroughly, it keeps changing on you.”

Still, Steinkamp might be downplaying her depth of knowledge of the software, which is used to produce video games and films like ‘Ice Age’ and ‘Avatar’, seeing as she teaches computer animation and digital design at UCLA. But she doesn’t seem to care if her students are more interested in game design or film animation than fine art, as long as they can find their artistic voice within the medium. “Hopefully my students look to that kind of thinking and find their own path,” she says. Likewise, Steinkamp seems fully on track with her own artistic route, even if, like ‘Premature’, it’s an arterial labyrinth of continuous exploration.
.
.
.
.
.
.
.
source: artsynet