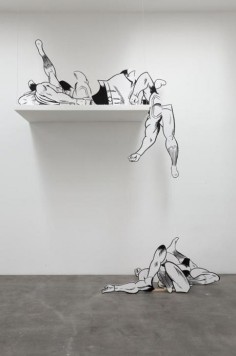 Jim Shaw is known to many for his elaborate, highly refined drawings of dreams that staple of Surrealism. For years, he would awake with a tape recorder nearby to document his memories of what was taking place in his unconscious. And then he got married, to artist Marnie Weber, and had a daughter. No more waking up in the night to record dreams but images from the larger collective unconscious have continued to recur in his work, which has been amplified in scale and complexity in recent years. His present exhibition at Blum and Poe, with some paintings approaching the size of a cine-plex screen, is both an enlargement and a refinement of his long-standing interests.

There are some familiar themes: comic book graphics, historic, mythic and religious figures, the house as seat of security and dysfunction, the aspiration to transcendence, the disappointment and ecstasy of spiritual struggle.

Shaw has painted his carefully rendered imagery over worn, backdrops for stage productions, adding a layer of actual as well as subjective nostalgia. The largest work in the show is a horizontal mural of paddlewheel boat on the Mississippi River faded to a barely legible pattern of blues and greens behind his array of heroes and angels, villains and demons, rendered in the distinctive black outlines of comic books. Though posed in active stances, they are not engaged, not even with each other, as though frozen mid-gesture.

Superman himself has been reduced to his drawn body parts, which are jumbled in a heap on a shelf mounted high on the wall. Lois Lane, meanwhile, is reduced to her hair, a molded wig on a stand, which was rendered in chocolate for the opening party.

The Mississippi River flows along in another painting where the waves represent the stages of man, from youth to death, all carrying a coffin in the shape of a house. Standing nearby a mannequin of man wears a suit painted with the pastel river scenes.

Despite the many references to pop culture, Shaw attacks deep issues, referencing operas that in turn reference mortality.

Shaw has long been concerned with such issues but this year there is a very real reason for his long hard look at the fragile human condition. His closest friend, Mike Kelley, took his own life. The two came from Detroit, formed their own rock band Destroy All Monsters, and attended Cal Arts at the same time. They remained close despite Kelley’s troubling lengthy depression. It would not be correct to say that Shaw’s art is about this dark moment but neither would it be correct to say that it had no effect.

In any case, this is a serious exhibition conducted in an occasionally goofy and absurdist tone. And the preparatory drawings in the upstairs gallery are splendid, testimony to Shaw’s growth as a draftsman.
.
.
.
.
.
.
.
source: artinamericamagazine

A connoisseur of both popular and underground culture, Jim Shaw appropriates styles and iconography from his vast personal collection of comic books, religious pamphlets, medical textbooks, vinyl albums and amateur paintings found at flea markets. Belonging to the low end of American artistic production, such artifacts are, for Shaw, worthy of rigorous research. He distinguishes between the drawings of comic-book artists and medical illustrators with the same degree of sensitivity as art historian Bernard Berenson demonstrated in pointing out the distinctions between a Titian and a Giorgione. Thrift-store paintings and instructional materials from Shaw’s collection have been featured in stand-alone exhibitions—a testament to his expertise. It is from this trove of cultural debris that Shaw draws his pictorial vocabulary in the large allegorical paintings (all 2013 or ’14) on view at Metro Pictures.

Painted atop discarded theatrical backdrops, another vernacular art form, Shaw’s current works recall surrealist fantasy illustration from 1970s album art. It is easy to imagine them as part of the stage set or gatefold LP cover for the unrealized prog-rock opera Shaw began planning around 2008 titled The Rinse Cycle, a humorous tribute to Wagner’s Ring cycle. Inspired by religious concept albums by the bands Yes and the Osmonds, The Rinse Cycle is based on the mythology of a fictional religion, Oism, which includes a revolt of dwarves, time-travel wigs and land submerged by giant waves—motifs that appear in several works in the show. For example, the wall-size painting The Rhinegold’s Curse (2014), titled after part one of Wagner’s Der Ring des Nibelungen, depicts the Rhine maidens from Wagner’s opera in the guise of the nudes on the cover of Jimi Hendrix’s Electric Ladyland. The likenesses of Wagner and Hendrix appear as burning candles in the rocky landscape, while dwarves march along the river with wheelbarrows of gold.

The dwarves in Wagner’s opera and Shaw’s Oist legends are conflated with Disney’s Seven Dwarves in Whistle While You Work (2014), in which they carry off the heads of decapitated superheroes or gods. Such diverse references, from rock ‘n’ roll and cartoons to religion and German romanticism, appear throughout the works in a stream-of-consciousness way, or perhaps according to a paranoid logic. Shaw, like his former Destroy All Monsters bandmate and CalArts classmate Mike Kelley, is drawn to the dark side of American culture, including conspiracy theories, cults and psychosis.

Shaw’s ability to seamlessly shift between registers is exemplified in The Deluge (2014). In this Michelangelo-esque creation story, the hand of God reaches out from a wave and, rather than fashioning Adam, morphs into Cary Grant and Eva Marie Saint in the climactic scene of North by Northwest. This convergence points to the archetypes that underpin Christian theology, Renaissance painting and Hollywood films. Shaw’s interest in Hitchcock is not surprising given this director’s predilection for the evil lurking beneath seemingly normal situations. An example of the “wrong man” storyline favored by Hitchcock, North by Northwest explores notions of innocence and guilt that originate in the Adam and Eve story. Dissecting the underlying themes and mythological facets of Hollywood cinema, Shaw takes a connoisseurial approach to pop culture that serves as more than an expression of fandom. It is a tool to understand the society in which we live.
.
.
.
.
.
.
.
source: simonleegallery

The practice of American artist Jim Shaw spans a wide range of both artistic media and visual imagery. Since the 1970s, Shaw has mined the detritus of American culture, finding inspiration for his artworks in comic books, pulp novels, rock albums, protest posters, thrift store paintings and advertisements. At the same time, Shaw has consistently turned to his own life and, in particular, his unconscious, as a source of artistic creativity. Providing a blend of the personal, the commonplace and the uncanny, Shaw’s works frequently place in dialogue images of friends, family members, world events, pop culture and alternate realities. Often unfolding in long-term, narrative cycles, the works contains systems of cross-references and repetitions, which rework similar symbols and motifs, allowing a story-like thread to be perceived.