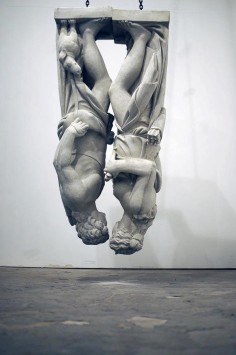 source: sweet-station
To Dust by Jonathan Schipper : Two sculptures are hung from a mechanism that gently grinds them into each other. The sculptures will slide against one another for many years creating new unimagined form.
.
.
.
.
.
.
.
source: avfestivalcouk

Jonathan Schipper’s work provides an alternative way of experiencing the world by slowing down physical events to almost imperceptible movement. His slow motion car crash sculptures are actual cars moving at speeds of 7mm per hour into a choreographed collision. The spectacular moment of the car crash is rendered safe and almost static. With a dramatic inevitability that reflects our own mortality, over the course of the Festival month the car is eventually destroyed.

Biography
Jonathan Schipper was born in Chico, California and studied at the San Francisco Art Institute. His sculptural work provides an alternative way of experiencing the world by slowing down physical events to almost imperceptible movement. His work has been exhibited internationally including the following venues and events: Swiss Institute, New York; Kunstmuseum, Wolfsburg; Pierogi, New York; AUTOBODY, Marfa Ballroom, Texas; Museum Tinguely, Basel; and Artefact Festival, Stuk Arts Centre, Leuven.
.
.
.
.
.
.
.
source: oppositionart
Hermetically sealed in our noiseless cars, smooth rides, and soundless interiors, we occupy a mental space not impacted by reality. Inside the car, waves of symphonies flood our ears. Driving our Infinity’s, sealed in our Kubrickian vehicles, floating over roads in our reality suspension systems, we live in a hyperbole of speed, rushing along in our death avoidance devices, lost in translation.

We stop and look at a car wreck to reacquaint ourselves with the lost velocity,
to reconnect with cause and effect. For we live increasingly in a world without effect, without impact.

Jonathan Schipper’s Slow Motion Car Crash is a machine that advances two model cars slowly toward one another over a period of one month, ending in an inevitable collision. Represented by a functioning wall-mounted model, Crash is conceived of as a full-scale piece where the spectator is front and center to the event. Writ large as cinemascope, this is the kind of car crash you can crawl inside of, like an Aztec skin coat.

Because of the reduced velocity of the event, the motion of the cars is undetectable, invisible to the naked eye. The speed has been distilled out of the piece. While speed has been removed, it sits like an erased De Kooning, ever present in the work. The crash implies it, leaving a relic of its transformative power.

If there is no speed, when is the act of death implied? We are watching for it. In our galleries, in our cars, as we slow down to look. Where is the point of transformation?

By reducing a crash to its Newtonian elements, by compartmentalizing the components, can we isolate the moment of transformation, box it back in, recapture it? If we slow things down can we catch death by the tail?

The futility of the pursuit is central in Schipper’s work. The mystery unveiled under the microscope always seems to reveal smaller components of mystery, drawing us around an Escher staircase.

A therapist once said you can never really know trauma, its inequities. Nevertheless people are still compelled to return to the scene of a trauma, to look for resolution to the inequities. To answer the mystery of why. The therapist spends her life reconciling people to their fates.

Lucky for the Met, artists don’t listen well to therapists.

There is a diaristic tone in much of Jonathan’s work. Often the space is intimate, naked. Figures confront themselves and their bodies while answering to a larger history in the crowd. Similar to the act of writing out one’s thoughts, it is a private publicized experience, like praying in church.

What does it mean to have an intimate experience in public? To meet one’s maker in a crowd? What does that intimacy mean? How does the group substantiate our catharsis? What is spectacle?

The crowd is reoccurring in ritual. The hypnotic falling back into the will of the mass, a giving into force, going with the flow, becoming one with the universe. Relinquishing control to the point that you face fate effortlessly, letting the roller coaster sweep you home. Becoming one with the uncontrollable instead of being in conflict with it.

Substantiating one’s existence in the secular world, knowing one is alive – feeling it – seeing it. This is a by-product of ritual, art, and religion.

Jonathan uses the gallery to reconfigure the mass by reassembling the audience, event, and sacrifice. All the components of the ritual are here now rudely crowding into the gallery space, into our new Church of The Individual Voice.

Through the looking glass we come. From our self-conscious evaluation space, our forum for breaking down the spectacle, our laboratory of the known object, into the Roman Forum we step. In Halloween costumes we come, as cowboys and Indians, as Aztecs, Romans, and Christian slayers, dragging with us, into the New World, old meanings in new plastic suits.