Ascent
Ascent is a large-scale site-specific light installation that embodies a variety of archetypical and physical associations – from microscopic observations, electromagnetic wave dynamics, and atmospheric phenomena of a whirlwind to a spiritual epiphany. Most importantly, Ascent offers a unique immersive experience, that invites the viewer to become its central point, and transforms the perception of the viewer on a sensual level. The light and the fog create a monumental dynamic space that is participatory, the space that opens up a new dimension and directs the attention toward the bodily sensations in the explicit environment. The viewer is free to approach the work according to its own sensual response, but direct interaction can offer the potential to evoke a new perceptual imagination.

DEPART
The Entropy Gardens
.
The Entropy Gardens is an artistic VR experience that explores one of humanity’s most archetypical artforms – garden making. It challenges its myths, aesthetics and modes of perception. Like a garden, The Entropy Gardens attempts to become a spatiotemporal poem — a poetic organism. In the form of a sprawling journey it constructs a hermetic, virtual garden as a poetic ecosystem — a psychic landscape that is foremost a complex audiovisual experience. It admits the visitor into a place that is equally challenging and contemplative (and of course profoundly weird). 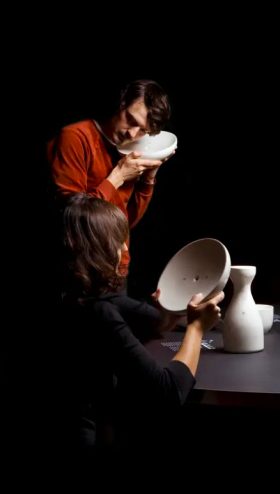 Whispering Table
Four unique festivities celebrated by people of distinct cultures are assembled in an archetypical scene of congregation. Visitors approaching a round table ﬁlled with empty dishes discover that these are actually telling personal stories about the symbolic meaning of food and rituals. Written by a story writer, these stories are are based on interviews and research carried out for this piece. The content changes according to the dishes‘ positions and their distance to the others. Similarities and peculiarities of different food ceremonies explored in a playful and entertaining way. By changing table constellations, the visitors reveal more and more stories and become part of a participatory spectacle. 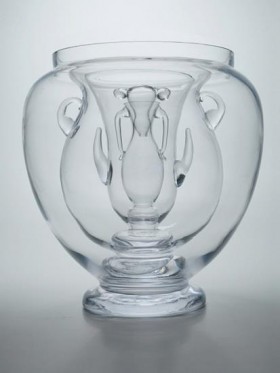 The Archetypical Vases
Designers Andrea Bandoni and Joana Meroz created ‘The Archetypical Vase’ to question the idea of creating and understanding objects through textual language. The design is part of their project ‘the object without a story’ which the two brazilian designers based in the netherlands explored together.