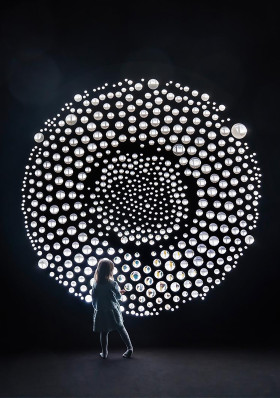 Algae Window
Algae window is an arrangement of glass spheres mounted in a wall. Directly behind the wall and the spheres is a window; vivid, miniature, inverted views of the scene outside the gallery thus appear in and inhabit each sphere. The composition of the work closely resembles the structure of one type of the single-celled algae known as diatoms, which remove large amounts of carbon from the atmosphere.

Biologizing the Machine
In Biologizing the Machine (tentacular trouble), the artist uses a stretched leather-like kelp to create hanging incandescent sculptures that conjure up images of organisms such as human organs and insect eggs through chrysalis-like pods within which animatronic insects flutter about. The use of this material calls attention to the ecological history and exciting potential uses of algae, a powerful and shapeshifting entity comprising the largest biomass on the planet. The ground beneath evokes a swamp (not too dissimilar from the watery underbelly of Venice) from which these organisms and other primordial beings may have come.