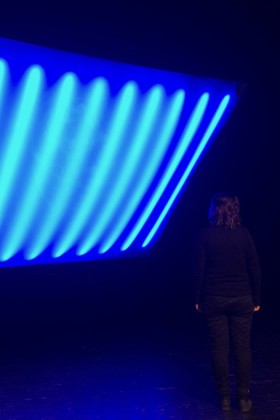 Astronauts who were able to observe planet Earth from outer space for the first time, all experienced a strong emotional reaction later called the overview effect. A euphoric feeling of oneness with the planet and all living beings as a collective biotope where ‘my molecules are yours’ and vice versa and individuality seems an illusion.
The Overview-installation consists of a motorized video screen that can slowly pan, tilt and lift. The screen is 3m x 4m wide and has LED light on the backside. An abstracted globe is projected on the front.