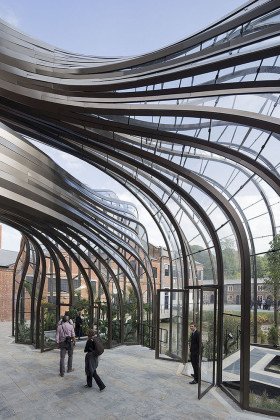 Bombay Sapphire Distillery
The existing buildings at the complex were built during the Victorian era to house a mill that produced paper for English bank notes. The buildings were later abandoned and left derelict until the complex was bought by Bombay Sapphire, the gin brand owned by alcoholic drinks giant Bacardi, who commissioned Heatherwick to overhaul the site, creating a new distillery and visitors’ centre […] Two curving glass greenhouses form the major new additions to the site. Hot air is channeled into the greenhouses through large pipes clad in strips of metal, picking up heat produced during the distillation process and carrying it out through openings in the red-brick walls of one of the existing buildings. 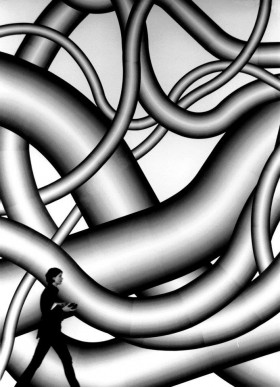 彼得·科格勒
Liquid
Peter Kogler`s works belong to the developing “post medial paintings” (Peter Weibl) in the 80`s. Moulded by the new media, these took on the complex form of installations. One of the main questions was the mental relationship between virtual and real space, as well as the perceptive possibilities of connection. The work, which reminds you of chaotic structures and Baroque dimensions, is based on the circularly moment of repetition, that consciously corresponds to the position of kunst Meran (pedestrian zone).