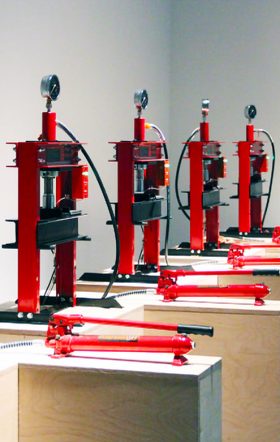 Oil
The main idea of this project is to present exhibition visitors with the chance to destroy any object that might happen to be on their person, in order to transform it into a unique sound composition. The installation consists of five hydraulic presses, capable of crushing practically any object (a mobile telephone, pair of glasses, headphones or whatever). In the process of destruction, a special microphone records the sounds made as the object undergoes deformation, and in just a few minutes, a computer algorithm transforms them into a 20 minutes album.