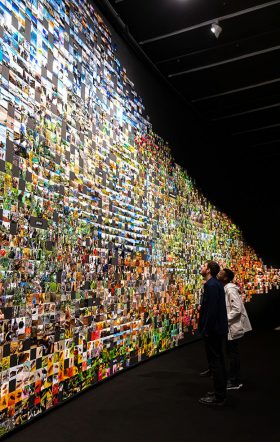 From Apple to Anomaly
Artist Trevor Paglen’s new Curve commission takes as its starting point the way in which AI networks are taught how to ‘see’ and ‘perceive’ the world by taking a closer look at image datasets. Paglen has incorporated approximately 30,000 individually printed photographs, largely drawn from ImageNet, the most widely shared, publicly available dataset. This dataset is archived and pre-selected in categories by humans, and widely used for training AI networks. In some cases, the connotations of categories are uncontroversial, others, for example ‘bad person’ or ‘debtors’, are not. These categories, when used in AI, suggest a world in which machines will be able to elicit forms of judgement against humankind. 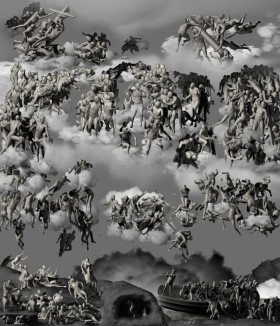 МЯО СЯОЧУНЬ
缪晓春
مياو شياو تشون
The Last Judgment in Cyberspace
虚拟最后审判
In his latest body of work, The Last Judgement in Cyberspace, Miao Xiaochun appropriates Michelangelo’s Sistine Chapel fresco as territory for similar provocation. Developed on computer, Miao has built a virtual model of the Apocalypse, architecturally structuring the tiers of Christian afterlife. Replacing each of the 400 figures in Michelangelo’s iconic work with his own image and placing them in corresponding pose and position to the original painting, Miao ‘photographs’ the scene from various vantages, ‘documenting’ the Second Coming from viewpoints both within and outside of the scene. 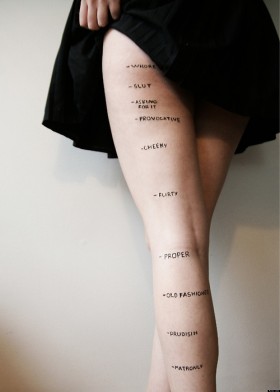 Judgements
Rosea Lake of Vancouver, posted on her Tumblr a photo of a woman with her skirt raised and on her leg written what the length of the skirt “means”. The post was entitled ‘Judgments’, since that’s exactly what happens when a woman puts on a very short or very long skirt. The photo went viral, with more than 200,000 shares on social networks. Even the organization Unite Women posted on its Facebook page, to show that feminism has not yet achieved all of its goals. And what do you think of that? Should a woman be careful with the image that is passed on depending on how she dresses or does every woman have the right to dress as she likes and shouldn’t be worrying about what others might think of her?