The Movement of Air

A frontal show for three dancers evolving in an immersive environment made up of images projected, generated and animated live. A show where two impossible ones come together: the body that flies, thanks to suspension devices and the body that fits into the image. An acrobatic and digital choreographic writing which outlines a body language opening onto other relationships to time, space and the world. Beyond the search for technical prowess, it is that of a dreamlike movement and writing through images. 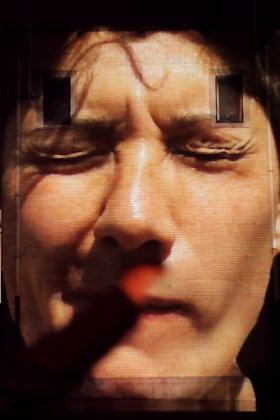 Face IT
The interactive installation FACE IT displays and exposes local people in a communicative setting where they are able to interact with faces of themselves or of other participants and at the same time become creative players and the stars of the artwork. This interactive situation not only creates a strong interplay between facial expressions and body movements, it also enhances these expressions and in the very best moments it creates a unique nonverbal language. 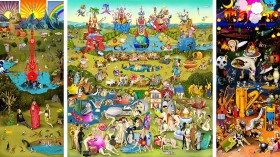 The Garden of Earthly Delights Triptych is one of the most famous works by the Dutch painter Hyeronimus Bosch. It dates back to the end of the fifteenth century and is kept in the Prado Museum in Madrid. The Triptych of the Garden of Emoji Delights is the version created by the contemporary artist Carla Gannis, in which space is invaded by small icons that today – thanks to the WhatsApp effect – are becoming an increasingly significant component of our language. It is not the first time that artists have played with emojis, perhaps inserting them in the real world or using them as neo-hieroglyphic fragments for cinematic riddles.