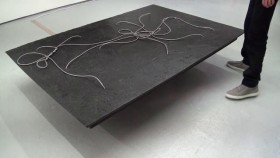 Stressato – Samurai Serpents
File Festival
Samurai Serpents” resembles Jean-Pierre Gauthier’s drawing machines (such as Marqueurs d’incertitude). Like many of the artist’s creations, the work emphasizes graphic quality and the movement of a line in space. On a large panel covered by an “action painting” (that is reminiscent of the textured and dark surfaces of a Borduas, Soulages or Kline), which looks like a (drawing?) table, cables are activated by an approaching viewer and begin to wiggle all over the place, twisting and intertwining in a surprising way – as though they were actually reacting to a threat. In moving about in this way, these silver lines on a black ground continuously change the “painting’s” composition and transform it into an animated image. Like a musical improvisation, the line’s disorganized movements create sounds that vary each time. 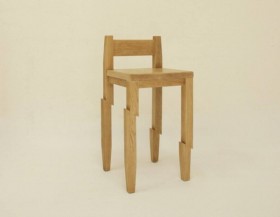