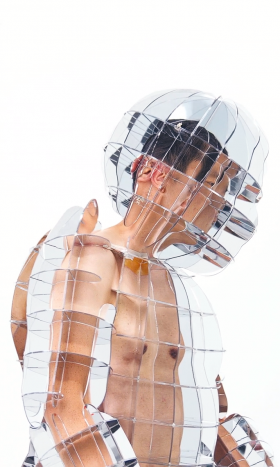 Mirror Armor
Being entrapped in narcissism is like a “self-jail”. Placing the mirror armor fixtures over my nude body causes the viewer to see the pixelated and fragmented image of myself. Usually covering, hiding, pretending to be a version of myself on the outside, therefore, “good looking” seems more of decoration or in itself a type of armor suitable for public viewing. Will these mirrors of self reflection cause me to wonder who I am on a deeper level? To discover who I truly am, what I am afraid of, why I waste my life without discovering my inner self. I constantly struggle with how I can break this boundary because I want to wake from this oblivion. 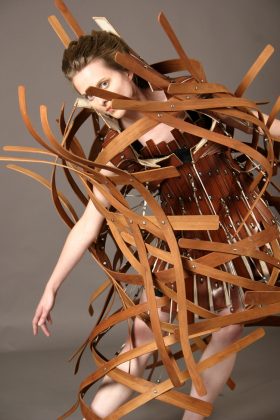 the girl in the wood frock
This project is based on a fairy tale in which a girl’s life is changed by what she wears. It is through clothing that the heroine experiences the outside world and the wood dress is both armor and prison for the girl, allowing her to escape the threat of incest while also disguising her true self from the prince.
Each dress in the series is an exercise in controlling one’s most immediate environment and how one navigates such an intimate spatial situation, using covers to filter what we feel by either exaggerating or muting sensation. They are also explorations of material technique and are made using a combination of high and low-tech methods and industrial materials such as printing press felt, rubber, and copper cable. The dresses are built rather than sewn and architectural construction informs their detailing. 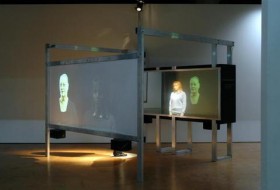