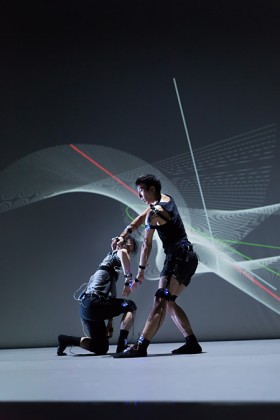 Dividual Plays
While the antonym of “individual” is “collective” in general, Gilles Deleuze (1925-95), a French philosopher, came up with the notion of “dividual” since the preposition “in” disaffirms the following word. Notions of “individual” and “dividual” have been, and continue to be, discussed in various contexts such as the economy, civil society, personal identity and more.
Through her time at The Forsythe Company, Yoko Ando came to define improvisation as “being individual but with the possibility of being collective at the same time”. While each agent performs independently, he/she is synchronized with other dancers simultaneously. RAM project began by finding shapes for the ideas in Yoko’s dancer’s mind. The piece expands on the idea of “dividual” and explores new dance, new notions of the body and the new relationships between the human body and technology by pursuing deeper interaction between dancers and the notion of system. 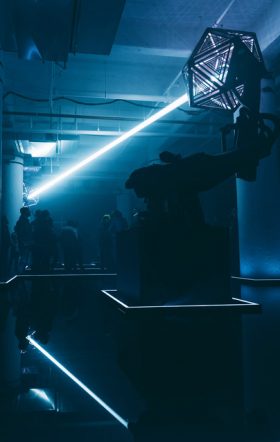 Telestron DTLA
Conceptually, at its foundation, the installation was an exploration of the absence and presence of light and how it defines a space. The team wanted to play with dramatic scale, and to do so they employed two Quantec KR150s as Robotic Conductors, wielding large, fabricated geometric shades to manipulate the various light sources and cast brilliant arrays of graphic shadow work throughout the space. They upgraded the show for The Row to be more immersive, adding more synchronized lighting fixtures and laser projectors around the perimeter of the space to embellish the ambient lighting states, and as a result amplified the user experience even further – creating a more sculptural and geometric installation for the masses. 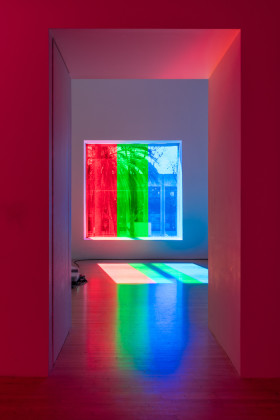