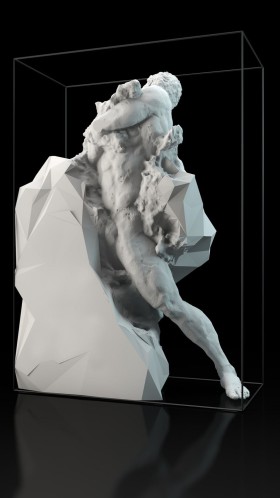 Captives
Captives is an ongoing series of digital and physical sculptures by Quayola and a contemporary homage to Michelangelo’s unfinished series “Prigioni” (1513-1534) and his technique of “non-finito”. The project explores tensions and equilibrium between form and matter, man-made objects of perfection and complex, chaotic forms of nature. In this series mathematical functions and processes describe computer-generated geological formations, endlessly evolving and morphing into classical figures resulting into life-size ‘unfinished’ sculptures. 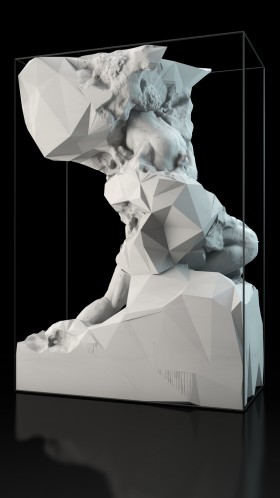 captives
“Captives is an ongoing series of digital and physical sculptures, a contemporary interpretation of Michelangelo’s unfinished series “Prigioni” (1513-1534) and his technique of “non-finito”.
The work explores the tension and equilibrium between form and matter, man-made objects of perfection and complex, chaotic forms of nature. Whilst referencing Renaissance sculptures, the focus of this series shifts from pure figurative representation to the articulation of matter itself. As in the original “Prigioni” the classic figures are left unfinished, documenting the very history of their creation and transformation.

Moses und Aron
Oper in drei Akten Arnold Schoenberg
.
Jean-Marie Straub
homage
R.I.P
.
Moses und Aron, known in English as Moses and Aaron, is a 1975 film by the French filmmaking duo of Jean-Marie Straub and Danièle Huillet based on the unfinished opera of the same title by c. During its 1975 run at US festivals, it was also known as Aaron and Moses, and was frequently reviewed as such.
It is one of three films based on Schoenberg works Straub and Huillet directed, the other two being Einleitung zu Arnold Schoenbergs Begleitmusik zu einer Lichtspielscene , a short film made directly before Moses und Aron, and, over two decades later, an adaptation of the one-act comic opera Von heute auf morgen. The film retains the unfinished nature of the original opera, with the third act consisting of a single shot with no music as Moses delivers a monologue based on Schoenberg’s notes.The film was shot on location in Italy and Egypt. It utilized the same team of cinematographers as Straub and Huillet’s Chronicle of Anna Magdalena Bach. The soundtrack and cast of the film is the same as the 1974 recording conducted by Michael Gielen (Philips 6700 084).The original German version of the film was dedicated to Holger Meins, a former cinematography student who joined the Red Army Faction in the early 1970s and died on hunger strike in prison. This dedication was censored by German broadcasters for the film’s first transmission in 1975. The English subtitles of Schoenberg’s dense German libretto were prepared by assistant Gregory Woods, who is credited on the DVD.The film was shown at the 1975 Cannes Film Festival, but was not entered into the main competition.