Myconnect “offers the experience of a symbiosis of connection between humans, nature and technology. The spectator becomes an actor by lying in a capsule, equipped with a helmet and body sensors measuring the variations in his rhythm This data is modulated and transmitted to a closed universe of mycelium culture (white mushroom) to produce alterations using electrical resistance. These variations in turn generate signals, sent back to the person in the form of vibration, sound and light. Each cycle can be different depending on whether the experience is stimulating or calming. This type of perceptual exchange enabled by technology reveals how much the human being is an integral part of the complex network that links him to his environment. 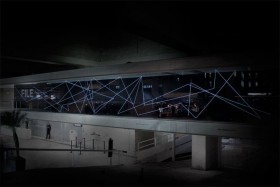