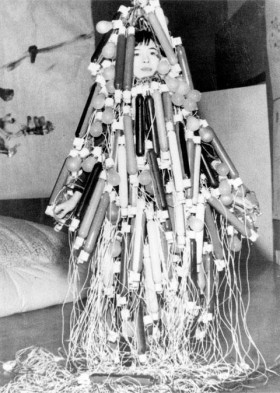 Electric Dress
«‹Electric Dress› is a powerful conflation of the tradition of the Japanese komono with modern industrial technology. Prior to her conception of this work, Tanaka had appeared in a larger than-life paper dress that was peeled away layer by layer, not unlike the peeling away of Murakami’s paintings; she was ultimately disrobed to a leotard fitted with blinking lights. Tanaka began to envision ‹Electric Dress› in 1954, when she outlined in a small notebook a remarkably prophetic connection between electrical wiring and the physiological systems that make up the human body. (…) After fabricating the actual sculpture, she costumed herself in it in the tradition of the Japanese marriage ceremony. Hundreds of light bulbs painted in primary colors lit up along the circulatory and nerve pathways of her body.»
. 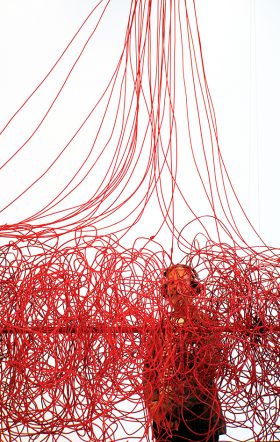 Cloud
Cloud, produced on-site at the museum using thousands of feet of red electrical wire, hosts a fourteen-channel composition that visitors listen to by wearing customized headphones. These devices, developed by the artist, contain magnetic coils that receive the magnetic fields circulating in the cable loops and make them audible. As visitors move around the installation, they look at the chaotic electrical wiring suspended in the gallery but hear the prerecorded sounds programmed into different segments of the sculpture.