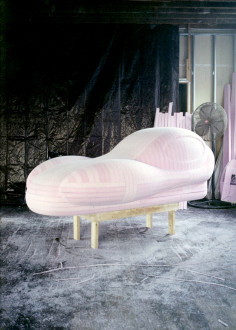 source:karenmossart
For her first major exhibition in the United States, Lee Bul exhibited work from her continuing series of karaoke booths that she started at the Venice Biennial in 1999.
This new work elaborated upon her interests in investigating the relationship between the body and how we experience our technologically mediated society.
With these pod-shaped, self-enclosed capsules she explored how to heighten the vicarious and visceral experience of karaoke, and how cross-cultural collective memories are constructed through pop songs.

The project was a two-part collaboration with the Fabric Workshop and Museum in Philadelphia for which I was the project director at SFAI. For Part I Lee Bul did a short residency and we exhibited preparatory drawing and foam models for her new series of three sports car-like karaoke pods that would later be fabricated at the Workshop. She also produced a video with SFAI students at the famous Tonga Room at the San Francisco Fairmont Hotel–the 1950s era Polyneisan bar where musicians performed on a boat and visitors experienced a simulated tropical rainstorm.

Following the fabrication of the three pods and the accompanying videos, the Fabric Workshop exhibited Lee Bul Live Forever Part II that subsequently traveled to the Power Plant in Toronto, the University of Michigan Museum of Art and Design, the Henry Art Gallery and the Orange County Museum of Art.
.
.
.
.
.
.
.
source:fabricworkshopandmuseumorg
Live Forever is a multi-media installation consisting of three karaoke pods in the form of futuristic race cars, and three original videos. This ambitious project continues Lee’s investigation of karaoke, a form of entertainment that has been wildly popular in Asian urban centers for over a decade. Her earlier project exploring the subject was Gravity Greater Than Velocity, an installation first exhibited at the Venice Biennale in 1999.

Each karaoke pod in Live Forever was first carved in Styrofoam, which was then used to cast the forms in fiberglass. The interiors are upholstered in leather, and equipped with sound systems and a small video monitor that plays one of three videos—Amateurs, Anthem, or Live Forever—while the words of the chosen song scroll by. The enclosed pods are comfortable and private, allowing individual participants to sing their favorite song at full volume should they desire to do so. While the audio is not played outside the karaoke booths, the video and lyrics are projected onto the wall opposite each pod, a gesture that heightens the ambivalence between public and private that characterizes each participant’s performance.

Lee Bul earned her BFA in sculpture from Hong Ik University in Seoul (1987). She has become known for her sculptural and multi-media installations that explore trends in popular culture, themes of feminine identity, and science fiction fantasies such as her series of female cyborgs, which were included in the 1998 Hugo Boss Prize Exhibition at the Guggenheim Museum SoHo, New York. Organized by the FW+M and the San Francisco Art Institute, her one-person exhibition Live Forever traveled to numerous North American venues in 2002 including the Orange County Museum of Art in Newport Beach, CA and the New Museum of Contemporary Art, New York City. In 1999, Lee was selected to represent her country in the Korean Pavilion at the Venice Biennale. Other solo shows have been organized by Fukuoka Asian Art Museum in Japan (2000), Kunsthalle Bern in Switzerland (Projektraum, 1999), and the Museum of Modern Art, New York (Projects series, 1997).