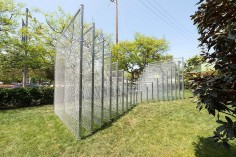 Andy Ralph was born in 1982, in Lake Arrowhead, CA, and earned his BA in Visual Arts (2004) from Point Loma Nazarene University. His work straddles the line between function and fiction, comfort and eeriness, subjectivity and banality. Often employing basic household objects and products typically found in discount or hardware stores, he transforms individual, unassuming commodities with a humble function into the most improbable things. Andy has presented in solo and group exhibitions at the Society of Arts & Crafts in Boston, MA, Aqua Art Wynwood in Miami, FL, Castle House Gallery in Poulsbo, WA, Phantom Gallery in Long Beach, CA, L&M Arts in Los Angeles, CA, and The Museum of Contemporary Art in San Diego, CA, among other venues. In 2010 Andy was invited to participate in the California Biennial at the Orange County Museum of Art. He currently lives and works in Brooklyn, New York.
.
.
.
.
.
.
.
source: dailyserving

Brooklyn-based artist Andy Ralph’s artistic practice could be summed up as a series of calculated—yet remarkably broad—risks. There is, however, one unifying identifiable approach in his work: Ralph engages with the imaginary potentials that reside in utilitarian objects. He transforms objects, or object-structures, into humorous, critical, and provocative configurations that provide a depth of both aesthetic-visual texture and conceptual rigor.

Ralph’s projects range from Manifold Destiny (2013), a meticulously coordinated outdoor installation of chain-link fence sections at L&M Arts, in Los Angeles, which takes its cues from minimalist sculpture, to his series of handmade faux-tools and hardware, Apparently Useless (2006). Of his relationship to humor and his wide range of materials, Ralph says: “My work always makes me laugh but only after it’s installed. It’s that first moment outside of the building process when I’m not fixated on the joinery, the hardware, or the material limitations; that’s when I can stand back and finally see the layers of absurdity. I’m really into how sinister the act of creating faux-objects is.”

For his solo exhibition Push-Pull (2007), Ralph engaged in one idea, manifested over multiple mediums and devices. Specifically, he filled an entire gallery with two recirculating fountains and series of drawings at Spacecraft Gallery, in San Diego.

The fountains, short rectangular galvanized steel platforms, were filled with identical yellow sponges. Each platform had one or more small water sprayers that were attached to a series of hoses that circulated water mixed with blue toilet-bowl cleaner. The water was absorbed by the sponges and circulated endlessly between the two fountain platforms and a series of forty-four-gallon water tanks. There is something entirely clinical yet sickening about the idea. This installation is more of an outlier for Ralph, but not completely. The piece, or series of pieces, repurpose everyday materials to build an ongoing circuit, one that creates a depth of hypnotic visual texture, as his other projects do. As the blue water sprays onto the sponges—almost mold-green in color—the simultaneous absorption and expulsion of water is hard to take ones eyes away from. A video of the installation can be seen on the artist’s website.

The artist describes his practice as one that “straddles the line between function and fiction, comfort and eeriness, subjectivity and banality. Often employing basic household objects and products typically found in discount or hardware stores, he transforms individual, unassuming commodities with a humble function into the most improbable things.” His works Lawn Chairs (2010) and Reclining Lawn Chair (2010) best represent his practice. These works embody the transformative nature of many of his other works but do so with a higher degree of clarity and a sharper use of materials. These once mundane and utilitarian objects become monstrous yet beautiful while taking on an unexpected rhythmic quality. These chairs, or what were chairs, appear different from each angle, constantly shifting and changing, provoking the imagination.