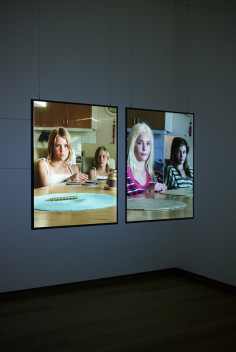 Fiona Tan trained in Hamburg and Amsterdam and works primarily with lens-based media. She is best known for her skillfully crafted video and film installations, in which explorations of memory, time, history and the role of the visual are key.

Fiona Tan has had solo exhibitions in musea and galleries worldwide including the MCA Chicago, De Pont Foundation, Tilburg, Vancouver Artgallery, the Sackler Galleries, Washington, the Aargauer Kunsthaus, Switzerland. Tan won the J.C. van Lanschot Prize for Sculpture in 1998, the Infinity Award for Art in 2004 and was awarded the DAAD Berlin scholarship in 2000/2001. She has been nominated for the Deutsche Börse Photography Prize and the Artes Mundi Prize. She is represented in many international public and private collections including the Tate Modern, London; Stedelijk Museum Amsterdam, Neue Nationalgalerie, Berlin, Schaulager, Basel, the New Museum, New York and the Centre Pompidou, Paris.

Fiona Tan works within the contested territory of representation: how we represent ourselves and the mechanisms that determine how we interpret the representation of others. Photography and film – made by herself, by others, or a combination of both – are her mediums; research, classification and the archive, her strategies. Her skillfully crafted, moving and intensely human works, expanded film and video installations, explore history and time and our place within them.
.
.
.
.
.
.
.
.
source: theartblog

Fiona Tan explores storytelling, memory, and the part they play in the formation of identity throughout this exhibition of five video installations, various associated sketches and one single-channel video. Rise and Fall (2009), elongated projections onto two large, side-by-side screens, is a wordless meditation, set to music, of a woman no longer young but still conscious of her looks; she was clearly a beauty in her youth. As the video proceeds we gather that the young woman pictured on the second screen is the memory of her younger self. They often move through domestic activities (sleeping, bathing, dressing) in parallel; this is inter-cut with scenes of violently rushing water (shot at Niagra Falls, it turns out). It’s a hackneyed metaphor – the water’s endless surging as an image of time’s relentless uni-directionality – but in Tan’s hands that doesn’t seem to matter; she creates extraordinarily emotional work out of simple stories and well-worn themes. This is true of all of her work; it’s achieved with such skill and restraint that the limitations of her material never bother us, but echo enough of our own thoughts that we are carried away by them. The large, single screen installation of A Lapse of Memory (2007) shows the often puzzling and slightly obsessive, daily routines of a man who, we’re told, is losing his memory; it is set, inexplicably, in the lush but abandoned Georgian Chinoiserie of the Brighton Pavillion. The narrator offers conflicting stories of the aging man who, forgetting his past, can neither confirm or reject them. Henry is waiting for a story he can make his home. The video posits memory as essential to the construction of self, and Henry (or Eng Lee, the protagonist of the alternative narrative), unable to retain his own story, may be losing himself to tales told by others.
.
.
.
.
.
.
.
.
source: dutchartevents

Fiona Tan is internationally regarded for her films, videos and photographs and was highly acclaimed for her participation in the 2009 Venice Biennale’s Dutch Pavilion. Fiona Tan: Rise and Fall features video installations and photographic series produced by this Amsterdam-based artist during the past three years. This major exhibition is an unprecedented opportunity for North American audiences to view Tan’s powerful explorations of identity and belonging in a world increasingly shaped by global culture.
.
.
.
.
.
.
.
.
source: contarconelfutboles