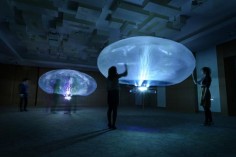 The GK-0G is the minimum size prototype of a scalable floating installation.
It is composed of five tetrahedral frameworks, its basic structural elements, arranged like sections of an orange. It is enveloped with a cover which acts as an interface between internal and external environments.

This model is meant to verify that it can float and move in the air. It is considered that different degrees of flotation can be gained by combining tetra balloons in different ways.

Questioning the physicality of tools anew

– Designing relationships that are going through constant mutation (tools with a time axis.)
– Designing communication between humans and tools
– Designing a space between information space and real space
Intelligent tools will become partners of humans

– From “servants” to “equal partners”
– Equal partnership between tools and humans, and collaboration between the two
– Soft tools that fit comfortably in human hands