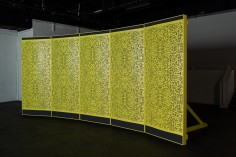 Hannah Sawtell was born in London where she also lives and works. Her most recent solo shows have been at Vilma Gold, 2013 and at the ICA, London with two linked exhibitions, Osculator and Vendor, at ICA and Bloomberg SPACE. Accompanying these exhibitions, she published Broadsheets 1-3, which were printed and distributed with Business Week magazine as well as producing ‘Sonic Lumps’ a performance in collaboration with Factory Floor. In 2010 she presented “Entroludes 1-6’ at Serpentine Cinema, London. She has been included in many group shows notably, ‘SoundSpill’, Zabludowicz Collection, New York, 2013, ‘With the Tip of a Hat’, The Artist’s Institute, New York, 2012, and in 2011; ‘Novel’ screening for ‘Time Again’ hosted by SculptureCenter, New York, ‘Outrageous Fortune: artists remake the tarot’ , (Hayward Touring), Focal Point Gallery, Southend and ‘The Great White Way Goes Black’, Vilma Gold, London. Her work has been shown by Dependance, Brussels and included in ‘Display With Sound’, International Project Space, Bournville, she was also shortlisted for the Jarman Award 2013 and is included in ‘Assembly: A Survey of Recent Artists’ Film and Video in Britain 2008–2013’ at Tate Britain. This year (2014) she has had a solo exhibition at Bergen Kunstall as well as two upcoming solo shows at New Museum, New York and Focal Point Gallery, Southend-on-Sea.
.
.
.
.
.
.
.
source: hannahsawtellcouk

I have always loved to draw. But a lightbulb moment happened when driving along my local high street, observing the vibrancy and activity of a community -shoppers and parents getting from one point to another; pathways crossing and intersecting, given context when placed against recognisable shops and schools. I realised that this passing of daily life is something that myself and many others can identify with. Through my illustrations, I try to capture elements of such moments.
.
.
.
.
.
.
.
source: e-flux

Hannah Sawtell was born in London in 1971. Recent solo exhibitions include Osculator, 2012, ICA London; Vendor, 2012, Bloomberg SPACE; and Re Petitioner in Zero Time, 2013, Vilma Gold, London. Recent group shows and projects include Sonic Lumps, a performance in collaboration with Factory Floor, ICA; Entroludes 1–6 at Serpentine Cinema, London; La Chausette, Dependance, Brussels; and Assembly: A Survey of Recent Artists Film and Video in Britain, Tate Britain, London. She was shortlisted for the 2013 Jarman Award.