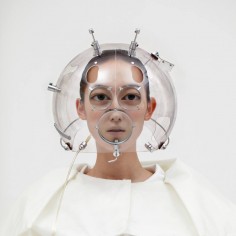 The korean artist extends his concerns to fictitious bodies of cartoon characters by inventing their fossil bones in a quasi-archaeological way.
.
.
.
.
.
.
.
.
source: artinasiakr

The 52nd Venice Biennale’s Korean pavilion was organized by So-yeon Ahn, chief curator of the Leeum, Samsung Museum of Art, artist Hyung koo Lee was nominated as a solo artist. By contrast with previous commissioners’ strategy which was making full use of natural surroundings, she chose highly artificial and strongly visual art works of Hyung koo Lee to make the Korean pavilion conspicuous as it is located at the corner, an out of the way place in Giardini. Hyung koo Lee has dreamed of participating in the Biennale ever since his days of working in Venice as an assistant for Ik-joong Kang and Hyung-woo Lee in 1997. Finally in ten years he was granted the opportunity to fulfill his dream. Let’s take a look at the work of this artist who will be representing Korea in this year? Venice Biennale where 77 countries participate in.

Hyung koo Lee(born 1969) has a B.F.A. from Hong-ik University(1998) and a M.F.A. from Yale University(2002). In the same year he was awarded the Joan Mitchell Foundation Award and continued to work in New York. He came back to home in 2003 in order to take part in the Ssamji Residence program, starting his line of work in Korea and his first solo exhibition ‘The Objectuals’ held at the Sungkok Museum(2004) received much attention. In 2006, his second solo exhibition ‘Animatus’ was held at the Arario Gallery and afterwards was selected as the only artist in Korea to participate in the Venice Biennale making it his third solo exhibition. The talk of the world was that this artist has held only two solo exhibitions and is much too young to be selected. However, Lee responded that the number of solo exhibitions does not determine an artist’s quality of artwork and also remarked that the methods and strategies that every artist possesses widely varies.

He affirmed that in his first solo exhibition, 5 years of strenuous work was displayed and in his second exhibition, he used ideas that were cultivated since 2000 and labor-intensively finished his work after two years. In this Venice Biennale, ‘The Objectuals’ series and ‘Animatus’ series along with a new piece of artwork are all going to be shown. At the same time, memos, drawings, materials, bone fragments and the documentations of his working process with new film work which will compliment the two series will be on display. Also, a performance on the opening day of the Korean pavilion is scheduled. He got us curious for it and of the happening as he implied serene things might be more impressive.

The exhibition hall will be divided into four spaces and in a broad sense, black and white. The black space will show the ‘Animatus’ series and the film work while ‘The Objectuals’ and ‘Lab’ series will be displayed in the white space. In the main space, the ‘Animatus’ series and the documentations of it are displayed and the others are separately consisted with ‘The Objectuals’ series, the works produced by the different types of method and apparatus. Each space shows a video recording of a person strolling around the streets of Venice with a helmet on and an installation of LAB where he invented these different equipments and devices.

The new work, as part of the ‘Animatus’ series, called ‘Felis Catus Animatus’ and ‘Mus Animatus’ represents the characters of ‘Tom and Jerry’ capturing the very moment when Tom tries to run away from Jerry. ‘3 pieces of bones’ which is displayed in the circular space and the products of the work process are the objects that play a crucial role in determining the lab atmosphere with not an apron but a mask and a white uniform which tells us about his anatomic approach methods toward the human body. In the new film work, recording the performance of walking the streets with a helmet on, is what’s similar to ‘New York’ displayed in his first solo exhibition. However, what makes it more interesting is the change of location to Venice and its approaching to a movie. In ‘New York’, he focused on capturing the responses of the public, but in ‘Venice’ the artist constructed a story board depicting the city of Venice as a core of solitary death and played the role of an actor, producer and director all at once. In addition, the sound director for the movie ‘Sympathy for Mr. Vengeance’ Young-kyu Jang, took complete charge of the sound effects needed during Lee’s working process with special equipment and fabricated a somewhat scary background music.

‘The Objectuals’ and ‘Animatus’ series are in appearance very different, yet both of these works are intimately related in that they both research the real and virtual body, the original and transformation form, and the body’s physical and visual evidence. ‘The Objectuals’ which seek the transformation of the original form is a narration of not actually changing the body, but a visual transformation created by the invention of a fictional body transformation device and the use of it. Since ‘Animatus’ that discovers the original form of the transformed subject is a counterfeit scientific execution that puts a fictional animal’s body back together after dissection, it could be categorized as a sort of research relating anatomy, biology and archeology. By inventing fictional devices and reconstituting those bodies is why Lee is known as a pseudo scientist/doctor, manque biologist/archeologist. However, isn’t he an artist who creates original artwork which is completely different from its origin?

This time, his LAB and natural history museum established together in a single structure composed of black and white spaces. ‘The Objectuals’ series constituting LAB was first started out as ‘Devices’ Lee produced from the aspiration in overcoming the physical complex that a oriental man faced during the time he was studying in the U.S. When he was holding the rails of a handle side by side with a Western person with about the small build in a subway, he noticed his hand was so small and when he got home, he created a device so called an fore arm enlarger, ‘Device that Makes My Hand Bigger’ with a plastic bottle of Coke and a whiskey glass. When the bottle is filled up with water, the fore arm looks thicker and with an optical device attached to it, it looked as though the person had only three fingers. With this device installed, he felt his inferiority complex was alleviated and therefore he named this apparatus the ‘Self Satisfying Device’ as well. The curiosity of enlarging parts of the body naturally brought into mind the most important part of the body, the face to his attention and afterwards decided to create the ‘Helmet’ series. In an old transparent plastic helmet, he installed an optical device (different types of lenses) and enlarged or reduced certain parts of the face for instance his eyes, mouth, or the whole face. The production and recording of the far from beautiful face images and the mutual understanding is what comprehensively defines his work and this work could be appreciated as a narrative of the irrationality derives from this society’s desire in changing one’s body.

The aforementioned ‘Device that Makes My Hand Bigger’ is significant to pay attention not only for the reason that it was the beginning of ‘The Objectuals’ series but also it originates initial idea of ‘Animatus’ series. The device making three fingered fore arm led Lee to imagine the very same fore arm fits in to it, suchlike the one have bones and anatomy of cartoon characters and this imagination was actualized into a work called ‘Untitled(2001)’. Likewise preceding one, an intention to invent the exact skull structure realizing transformed image through put on the helmet which is an optical devices to alter the appearance of face were idealized into ‘Homo Animatus(2002-2004)’ The artist’s urge to transform the virtual body into the real body was transferred to the cartoon characters based on animals, the best typical simulated bodies.

Cartoon characters are fictional anthropomorphic creatures living in a two dimensional zone. They are both residing in situations much like our own and representing personalities, behaviors and thoughts of their creators which are human beings. The scientific analysis of these characters and reconstructing them into the three dimension is what the artist called, ‘the process of research in finding the potential or hypothetical anatomic evidence absent of figural proof(excerpt from artist’s notes)’. With his biological background, Lee poses the skeletons that is a symbol of dead bodies in a dynamic posture and ironically plays god giving a new life to the dead bodies. Lee restores the real shape of characters like Tom and Jerry, Bugs Bunny, Donald Duck, Coyote and classifies these creatures into Latin scientific names according to the biological categorization hence combines it with ‘Animatus’ a Greek world referring to ‘Breathe life into something’ and ‘make enliven’. This makes certain the birth of the creatures and the existence of the creator.

In this exhibition as a special feature covering all aspects of his own world of art, he planed to hide the inspiration of his works up to now and clues about his subsequent series. If we have experienced the virtual reality through transformed images of the body and restored skeletons of characters in his previous solo exhibitions, at this time, we might feel walk in to the three dimensional genuine world realizing his unique imaginative power. Editor | Sae-mi Kim
.
.
.
.
.
.
.
source: nnmru