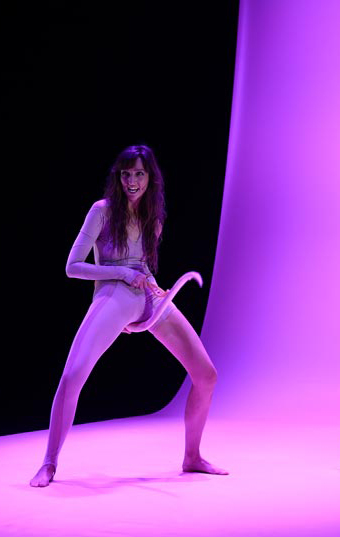 source: ievaco
Tongue PhD is a new eclectic solo performance by artist Ieva Misevičiūtė. This ambitious piece consists of ten chapters each investigating a different metaphoric lens of the tongue. Tongue PhD fuses elements of physical theater, academic reverie, dance and Butoh, structured in the format of a PhD dissertation. CREDITS concept, text, choreography and scenography Ieva Miseviciutè
.
.
.
.
.
.
.
source: bombmagazineorg
In Tongue PhD––Lithuanian-born, New York-based artist Ieva Misevičiūtė’s latest solo performance, which had its US premier at The Kitchen this September––the muscular movements, animal ancestry, and (countless) metaphoric permutations of the tongue are explored and presented in the style, oddly enough, of a PhD dissertation. For emphasis, copies of Misevičiūtė’s dissertation outline––still pending approval by the “International Cephalopod Academy” (a reference to the anatomical resemblance between the human tongue and an octopus’s tentacle)––are passed out to everyone in attendance.

If Misevičiūtė’s dissertation has a proper thesis, it surely centers on the role of the tongue “as a bridge between intelligence and madness,” recognizing the organ’s integral role as a vehicle for rational inquiry and its more carnal function as a sensorial slip-and-slide.

The academic conceit is meant to amuse, and the skewering of overly serious and arcane forms of scholarship can be seen as one of several unifying threads throughout Misevičiūtė’s activities. For further evidence, see the 2012 performance of 27 Gnosis at dOCUMENTA (13) and a 2010 art historical “lecture,” The Complete History of Obdurance Art from 1860 Till the Present in 30 Minutes, at the Center Pompidou––both performed with partner, fellow provocateur, and Tongue PhD’s script co-writer, Michael Portnoy.

Unsurprisingly, Misevičiūtė spent her early years working as a clown, and many of the devices used to achieve circus theatricality––physical comedy, masks, prosthetic limbs, extreme facial contractions, feats of bodily virtuosity––also serve the artist well in this production. Early on, she appears, bathed in red light, with arms outstretched in an accentuated gesture of openness. Her nimble bones clad in a pink, one-armed, one-legged bodysuit, Misevičiūtė isolates her ribs and stomach and begins to rotate her hips to a funny keyboard tune. She shows us the tip of her tongue and the dance starts to feel like the imitation, or the mime, of a seduction. Her movements rapidly give way to exaggeration––the tongue juts in and out of her mouth and her impossibly long arms wrap backward around her torso. It is, as with much of the night’s actions, disquieting in its absurdity.

This project also relies heavily on the emotional and bodily exertions of Butoh, as well as physical mimicry, dance, and sculpture. At one point, a long silicone figure that resembles an octopus tentacle (again, the tongue’s ancient cousin) becomes a whip in Misevičiūtė’s hands, then a tail, then a floppy phallus, and then (perhaps, inevitably) a spiky erection, which the artist proceeds to mount and stroke gleefully. Finally, the tentacle becomes a shapeless extension of Misevičiūtė’s arm––lashing toward the roof of the giant mouth and pulsing with her frenzied movements.

Tongue PhD ends with Misevičiūtė impossibly balanced––ever the circus performer––on a pink, skull-sized ball, her forehead and nose partially obscured by a helmet that is also a mask. She reaches for another of the tentacle/tongue sculptures and pulls its long, shiny form up to rest directly on her face––finally, and intimately, bridging the human to the animal, the articulate to the inarticulate, the conscious to the unconscious.
.
.
.
.
.
.
.
source: ievaco
Ieva Misevičiūtė is a New York-based Slow Loris, working in both visual arts and theater. Her practice combines physical theatre, dance, stand-up, Butoh, perverted academic language and sculptural work.
She worked as a clown in the circus throughout her youth, has backgrounds in various movement and improvisation techniques; holds a research MA in Cultural Analysis and MA in Political Studies from the University of Amsterdam.

She has presented her work in Centre Georges Pompidou in Paris; Sculpture Center, Swiss Institute (as part of Performa 09) and MoMa PS1 in New York; dOCUMENTA (13) in Kassel (with Michael Portnoy); Hauser& Wirth in Zurich; Time-Based Art Festival in Portland; de Appel art center in Amsterdam; Cabaret Voltaire in London; Playground Festival at STUK in Leuven, Belgium; Beursschouwburg theater in Brussels; Western Front in Vancouver; Swiss Sculpture Exhibition in Biel-Bienne in Switzerland; and Contemporary Art Centre (CAC) in Vilnius, among other venues.

She co-curated Mindaugas Triennial – the 11th Baltic Triennial of International Art at CAC, Vilnius and curated a night of performances Alligators! at de Appel art center, Amsterdam.
She was recently a speaker at the Sommerakademie im Zentrum Paul Klee and is a visiting lecturer at Malmö Art Academy in Sweden.

Her most recent solo production Tongue PhD premiered at Playground Festival, STUK in Leuven; Arts Printing House/CAC, in Vilnius, and The Kitchen, in New York.

EVERYTHING IS SOCIETY: STARS, CELLS, BODIES, POLITICAL GROUPS AND THE LIVELY FIREING OF THE BRAIN

WHEN I AM MAKING A PIECE, I do character studies of typically a few animals, some insects, some objects and sometimes people. All these elements end up morphing together and creating imaginary beasts — half objects, half human, half insect, half slime. For instance:

I Will Rip Your Arms Off
Roony Mara as a girl with the dragon tattoo, unethical documentaries, slugs, chicken legs, duck parts, Audrey from Twin Peaks

METHOD DANCING
While performing a sequence of movement, in my mind, I have to establish a very concrete environment, a character, a group of muscles that are leading it, a gaze, a type of voice and an emotion that is unrelated to all the rest. I always improvise and I never improvise.

FOOD CHAIN
Life would be so much richer if we would be back in the food chain. Could we try? Like maybe for one year?

HUMANS
Where is a space for humans to be amebas? Aren’t we anyways just flesh wrapped insects?

THE SPACE BETWEEN ANTHROPOCENTRISM AND OBJECT ORIENTED ONTOLOGY

Reducing human subjectivity to a single idiosyncrasy, largely exaggerating it to the degree where it turns into a character on its own, almost into an object.

I WANT to achieve tens of thousands of things, ask one million different questions and point to a confusing number of directions, accumulate and use endless influences, follow the path of many great artists. — because still it will never be enough — as we can only try to be as radical as reality is. The only thing that is left to do is to act insane.

SORRY, but we are in the state of total crisis — and our biggest problem is the lack of presence. Starting from everyday conversations and behaviors to..

THEATER (& performance, street shows etc)
I am pretty old fashion when it comes to theater. In fact ancient. Theater is an art form that forgets it’s past the soonest. There is virtually no way you can revisit the works of the old masters — in the best case scenario we know 50 years back.

Theater is a laboratory of heightened awareness — for both the public and the actors. We should use all of the available tools and tricks to expand the attention spam of our audiences far enough to start pouring denser contents. Coz the true leaps in intelligence happen not in short bursts of thoughts but in chains and arches of ideas.

I LIKE art that is convincingly unbelievable, that makes me want to live, feel sad and embarrassed that I don’t do enough.

I DON’T LIKE art that I can understand, that is witty and clear, that has an artist statement and is based on a theory. I hate sex on stage.

I am DOGMATIC and I really like dogmatic people. One of my dogmas is to constantly update myself. I don’t worry about my dogmas as I know they are constantly changing. Dogmas are like waves, they need to be big enough to reach a shore, to brake and to dissipate, to became a foundation to the next wave.. And so it goes. Mind is a like a washing machine. There is no end to it all. We’ll never figure it all out. Build to destroy, destroy to build that’s all i know for today.

HOW MANY EGG SHELLS WERE STUCK TO THE ROOF OF YOUR MOUTH?