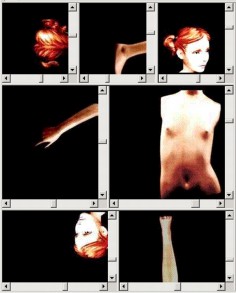 This work by Ricardo Barreto and Paula Perissinotto offers us a split, fragmented, impossible dance in a divided, multiplied space. Cyberdance consists in the combination and re-combination of elements which represent the different parts of the human body. A mannequin was photographed as a model in different positions. These images were later converted into animated form, allowing the users to combine them in different ways, as well as link them to the different dance terms, the names of the postures and classical ballet positions. On a page divided into frames containing fragments of the mannequin, we can see her head, legs, torso and arms revolve, while simultaneously allowing us to subdivide each frame by clicking on it, each frame composing an aberrant doll whose fragments dance, silently, independent of each other. There is no music or rhythm, neither is there any space. It is a digital dance, a dance in which time and space have been transformed into a platform.
.
.
.
.
.
.
.
source: itauculturalorgbr

“Cyberdance ” is a proposal that looks in to exploring new dynamic structures , offered through the use of machines (hardware and softwares). These new structures made possible, mainly through the computer, enlarge the creation possibilities, helping to make the creative process more complex.

The objective is to produce work enabling the spectator to be taken through the images, in such way that they are modified by several alternatives. This resourse will be available in the net as a Browser Art. This through the internet and the capacity of the computer to modernize hipertextual structures it will enable us to explore the relationships between the structures made out of various created to compose the “Cyberdance” . Browser art has been used by various artists as a form of poetic expression in the cybernetic space.

” Cyberdance ” consists of combining elements that represent parts of the human body. A mannequin as a model was photographed in many differentes positions. These animated images of the parts of the mannequin’s body, are combined with each other , and also will be related to the nomenclatures of the dance, the names of the postures and the ballet positions.

” Cyberdance ” will look for the movement synchronizing the fragments of the mannequin, that won’t be limited by space, but be potentialized in virtual space, exploring the relationship of the parts of the mannequin that can be developed independently: the dance of the head with the arms without the presence of the rest of the body, the dance of the legs with the trunk, the dance of the arms with the legs, the dance of the head with the trunk, trough this structure of combinations, the spectator can navigate trough the show that will be selected by him , while he click at the sensitized areas of the screen.
Barreto, Ricardo. http://www.satmundi.net/ Born in Rio de Janeiro in 1956, lives and works in São Paulo. Gradueted in Philosophy from the University of São Paulo in 1981,Graduated in Fine Arts from Belas Artes School, São Paulo 1980. From 1983/1986 he has developed works linked to the alterity conception. From 1986/1990 he has developed works related to videos and performances. From 1990/1996 he has developed works linked to instalations. From 1996/1998 he is being developing works related to eletronic and cybernetic art. Selected bibliography, workes and places where he held his shows can be seeing at: www.satmundi.com/INSAT/ric.html

The two authors suggest to build a CD-R0M of fiction interactive, with the goal to developed new possibilities of navigation. 0ne of their basic concerns in the digital arts is the potentialization of the navigation, in other words to develop new ways to map a digital work. In this sense, to explore a new navigation, which Paula Perissinotto and Ricardo Barreto are calling ‘dynamic navigation’, is the possibility that the navigator or user simultaneously navigate, modify and produce a dynamic development of a choreography, avoiding like this the mere reaction of interactive in the outline input and output. The ‘dynamic navigation’ would take an uncertain production on the part of the user by taking him to the creative and inventive use of the navigation.
.
.
.
.
.
.
.
source: artedigitalammblogspot

The elaboration of cyberdance has as its foundation and basis a combinatory art: a metaphor of dance with all its potentiality, however with a frightening scope of possibilities, which can pose a problem. The work of art which develops and creates a high degree of complexity, becomes from the production point of view, something quite of an impossibility to accomplish, thus, means had to be elaborated to overcome this impasse.
Three aspects were taken into consideration in order to acheive this: First, an elaboration of a strategy for the production of the infactitive work; Second, the aspect pertaining to the work as a result of its indetermination and its infactibility, and finally, the action of the navigator through the work and his participative interaction.
In the strategy for the production of the work of art, three tactics were developed with the purpose of attaining its total complexity: 1) The tactic of the network consisted in establishing a relation of one part with the other parts of the work, which led to a complete relation between them, that is, all are linked amongst themselves in such a way that one can move from one to the other inside the work. The advantage of this complete connection is that with only a few elements, a high degree of complexity can be achieved where the problem of infactivity can be solved; 2) the strategy of multiple navigation was sketched starting from the simultaneity of the parts and to develop it, a connection was invented which was named condisjunction or multi-junction, which acts simultaneously as a conjunction and a disjunction. A disjunctive connection is that which normally takes us from one position to another inside the chain, starting from a previous choice, thus causing two outcomes: a connection and a disconnection of the part the navigator found himself previously; the conjunctive connection takes to the main position another part, another layer, another window, adding information without leaving the main position; however in the condisjunctive connection, again we have a connection and a disconnection, but not in linear fashion; we do not navigate merely in successive form, but simultaneouly, thus causing a transformation of the main window, as it transforms and establishes a new distribution of the main window, creating a navigation of multiple courses, in which each has it own navigation, and at each moment when penetrating the work of art, there is an increase of complexity in the navigation: Squadron navigation, in convoy and in caravan or potential navigation. 3) this fact caused the strategy of a complete interaction or reciprocal interaction of all the parts, since each part as well as each element could now interact, that is, this was only possible with the condisjuntive connection, which made possible the simultaneity and the presence of the part of the work thus creating a complete interaction.
In this way, the work becomes limitless, since it is impossible to perceive its dimension, as well as the quantitities of combinations involved, unless done mathematically through an exponential, which does not solve the problem, since it continues to the perception of the navigator to have no defined limit, therefore without end or beginning. It also has various entries, where each entry can be configured differently, as in a labyrinth where each entry reconfigures its routes. Thus it is more a mobile multiplicity of courses than an architecture of fixed routes. There is also a flexibility of its parts which is an open component that the parts can have between them, and in such a way distributed amongst themselves that their mutual contact can cause differentials and new distributions, which many times leads to difficulties that need new solutions. Another factor and maybe the most important is its infactibility since it is considered diacronically and cannot be defined since the number of parts and combination involved do not make it completely feasible. However it is this infactibility which permits that the work is always re-invented, that is, it can evolve.
The work in relation to the navigator is considered as interaction, however not a mechanical interaction, in which the parts involved react merely to a determined action, it is thought of as a participating and inventive interaction which consists in the navigator establishing rules freely, that is, they are not given “a priori”. Each navigator can thus establish new behaviours, as well as create his own style through micro variations.
Let us also imagine that the works thus elaborated could communicate and interact with other works of the same type, which would cause modifications in the internal elements, making them more complex and unpredictable, nevertheless, more transmutable; a variety of elements depending on the interaction of other works.
We live in a time in which, more and more, the cyberartists, through the technological potential are facing the problem of how to construct the world. The lesson to be learned is that to invent the world is to invent it totally incomplete, in other words, to do it infactitively.
Ricardo Barreto