an artist and a female artist 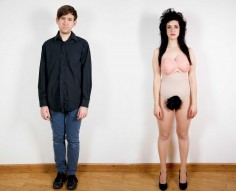 Sarah Maple was born in 1985. She completed a BA in Fine Art from Kingston University in 2007, and now lives in her native Sussex. In the same year she also won the ‘4 New Sensations’ competition for emerging artists, run by Charles Saatchi. Since then Sarah’s artwork, films and performances have been exhibited in New York, Canada, Israel and throughout Europe.

‘Not for the coy or faint of heart, these unflinching, occasionally even controversial, investigations into what it is to be a woman and a Muslim in 21st century Britain are made joyful by her own very personal brand of boisterous, tongue-in-cheek humour. This is not sensationalism for sensationalism’s sake, but rather a heart felt urge by a twenty-seven-year old artist of great sincerity and talent, for the viewer to look again, and this time with a more questioning eye, at traditionally accepted notions of identity, gender, culture and religion.’ – Beverley Knowles 2011
.
.
.
.
.
.
.
.
source: sarahmaple

Sarah Maple, It’s A Girl! – 2012
Seeing Sarah Maple’s work got me raving again like we did in the 70’s when we naively thought we could change the world.

Maple has been named ‘the heir to Tracy Emin’s throne’ by the Independent on Sunday. I have to confess I found that a sobering thought because as far as I know Tracey rejected Feminism while being happy to benefit from those who took risks and did the hard pioneering work, artists such as, Kate Walker, who sewed her life in to her work in pieces such as The Other Side of the Blanket. Tracey went for the money without reference to those who paved the way for her success.

So it’s a pleasure to see Sarah’s work, closer to artists like Valie Export, Lynda Benglis, Loraine O’Grady, Suzy Lake, Kirsten Justensen, Alexis Hunter, Monica Ross, Loraine Leeson and later Sonia Boyce and Sutapa Biswas, to name a few, mostly from my generation when feminism was hot, in a recession, incidentally, as now.

These women’s work has come back into view in recent years, in part on the back of various feminist art shows, notably WACK!: Art and the Feminist Revolution that featured the work of 119 women artists and toured MoCA Los Angeles, MoMA PS1 New York, The National Museum of Women in the Arts, Washington and Vancouver Art Gallery, throughout 2007-09; Gender Battle at Santiago de Compostella in 2007; and perhaps most interestingly of all because of it’s cross-generational theme Rebelle: Art and Feminism, 1969 to 2009, that took place at the Museum voor Moderne Kunst, Arnhem, Holland in 2009. Like the 2009 Istanbul Biennial these shows included artists unafraid to take risks, some of whom are now coming from places beyond the usual New York / London / Paris / Frankfurt axis.

So, young artists like Shadi Ghadirian (an Iranian artist) whose images of burka clad figures with kitchen utensils over the facial area and Zanelle Muholi’s (a South African artist) with images of transgender, gay and lesbian individuals, present alternatives beyond the official mode and in so doing begin a new phase in the breaking down of gender and racial stereotypes.

Similarly, Maple who was born and lives in Sussex but uses images from her own ethnic Muslim background, uses those same images of the burka clothed figure (see Blue, Badges, Burka) but also transgresses that image by using body images (see Passport) and in one of her new paintings menstruation (see Menstruate with Pride).

Maple uses a variety of media from Performance to Posters to Painting, embracing, I think, the notion of finding the right media for the right context, the right subject, at the right time; in itself a brave move – its easier to market an artist using a recognisable single media.

* Andy Warhol showed us how to shop
* Feminism showed how to take collective action
* Steve jobs showed us how to use technology
* David Cameron shows us the 50’s again
* Sarah Maple shows us what British women look like now.