A radio telescope scans the skys in search of signs of extraterrestrial life.
The received raw signals serve as input data for a neural network, which was trained on human theories and ideas of aliens. Now it tries desperately to apply this knowledge and to discover possible messages of other civilizations in the noise of the universe. Mysterious noises resound as the artificial intelligence penetrates deeper and deeper into the alien data, where it finally finds the ultimate proof.The sound installation revolves around one of the oldest questions of mankind – one that can never be disproved: Are we alone in the universe? 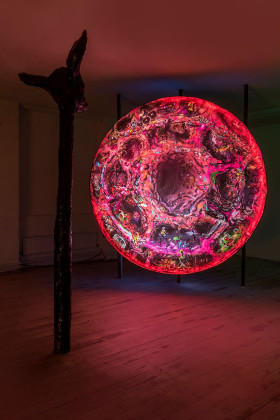