Mens SS 2020
“After the scene shifted from a selection of 2D garments, removed to reveal Browne’s brilliant designs below, the show began in earnest. The looks, as gleefully playful as ever, took on elements of Browne’s typical offerings and elevated them to the level of supreme costume design. Several imposing silhouettes recalled dresses worn by Antoinette-era aristocracy, with gargantuan trousers and shapely sportcoats crafted to resemble distorted Ivy League staples. Elsewhere, pleated skirts emerged as a prime trouser replacement, with cropped jackets and seersucker jockstraps to introduce a sporty motif.” Jake Silbert 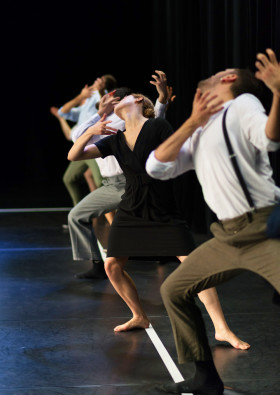 Avant toutes disparitions
“Before any disappearance“, it is urgent to live, to dance, especially to transmit. By continuing his playful exploration of the history of dance and in particular by defeating the codes of ballroom dancing, the current director of the Center chorégraphique de Tours once again imposes an intergenerational vision of his art.

Hotfix
In the midst of the pandemic, people experience every day that technology such as smartphones and the Internet make social distance bearable. With his AR sculpture, Manuel Rossner shows how technology can become a hotfix, a quick solution to an unexpected challenge. “Hotfix” with its bubbles and lines is a playful introduction to problem solving through gamification.