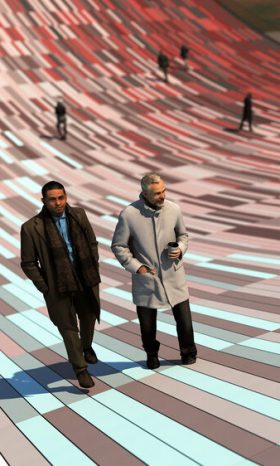 FROM DARKNESS TO LIGHT
South Georgia Heritage Trust launched an open call for a site-specific commission to be located on Grytviken the former whaling station of sub-Antarctic Island of South Georgia. The project was required to celebrate the whale through a reinterpretation of the former Flensing Plan (a large timber deck used to process the captured whales) and offer a message of hope for future generations by demonstrating how humankind can move from exploitation to conservation. Our proposal imagines that the deck of the Flensing plan has been cut like a piece of flesh from the ground and bent upwards to form an arc. The timber deck is replaced with concrete pavers which are coloured based on the activities which took place in the sites past and present (whale processing and whale watching). The coloured pavers are positioned to create a gradient which provides the visitor with a visual representation of the way the site has changed over time. 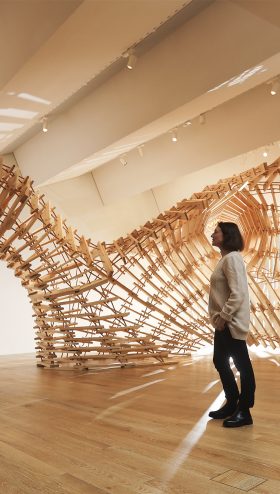 Up Sticks
‘Up-Sticks’ is an informal turn of phrase dating back to at least the 19th Century to express leaving your home in haste. It is thought to originate from the rough cut, unseasoned timber frame architecture of the Scottish croft designed for temporary occupation. These sticks from which the croft was partly fabricated were of great value and were taken and reused when the household moved on. Up-Sticks is an expressive timber structure that twists and curves using only spruce wood planks and beech wood dowels. No glue or nails were used to hold the planks in space; it is the hygroscopic behaviour of the dowels, which shrink and swell according to their moisture content, and their computationally defined position that lock all planks into position. Up-Sticks was assembled from large elements all prefabricated in the Robotic Fabrication Laboratory at ETH Zurich, the largest of its kind in the world.