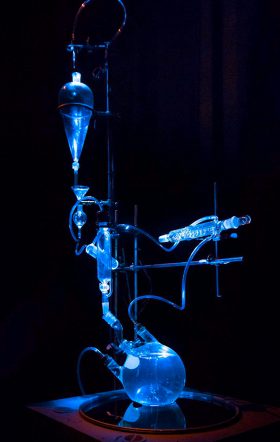 Aquaphoneia
Aquaphoneia is an alchemical installation centred around the poiesis of time and transmutation of voice into matter. A large horn floating mid space echoes the ghosts of Edison, Bell, and Berliner’s machines. But unlike early recording, herding sound energy to etch pressure patterns in solid matter, this odd assemblage transmutes voice into water and water into air. Disembodied voices abandon their sources to cross the event horizon of the horn. Estranged, the schizo-phone falls into the narrow depths of the bell, squeezed into spatiotemporal infinity, calcinated, liquified and released: The aqueous voice then flows into three alchemical chambers where inner time is surrendered to the tempi of matter: unbound, yet lucid and sound. 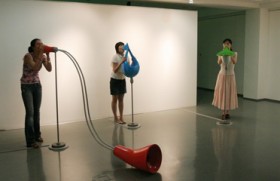