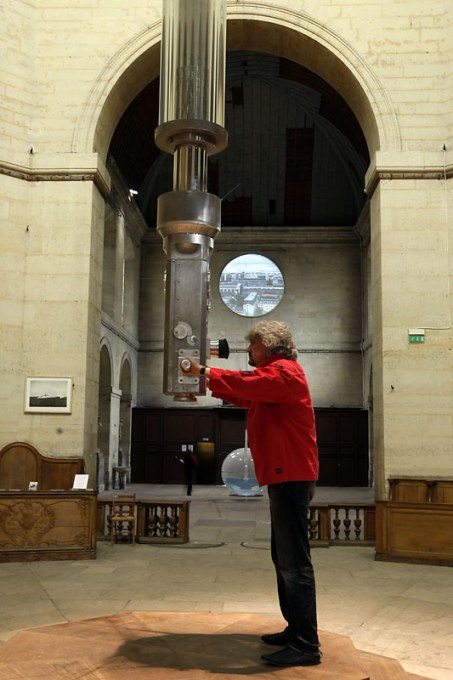 Chapel Saint Louis, de la Salpetriere, Paris
Installation
Periscope installation with a cable suspension system. Metal, plastic, video optic system, acrylic spheres, sound wave generators.
The keystone artistic project of the Paris Fesitval d’Automne will be realized in September 2007, at the Salpetriere chapel in the center of Paris. A 36-meter periscope hanging from the dome forms a rigid vertical, equipped in the lower part with the head of the periscope with an ocular allows any viewer to look at the Parisian horizon, expanding vision in the spectacular spaces of the cathedral. The real-time video image is broadcast on closed-circuit television to chambers, offices and other buildings attached to the chapel of Salpetriere hospital. The patients, doctors and staff have the opportunity to take in the unexpected view point of the random viewer and peek past the horizon. This project has been organized by the French Ministry of Culture and the Energy of Art Foundation, Moscow