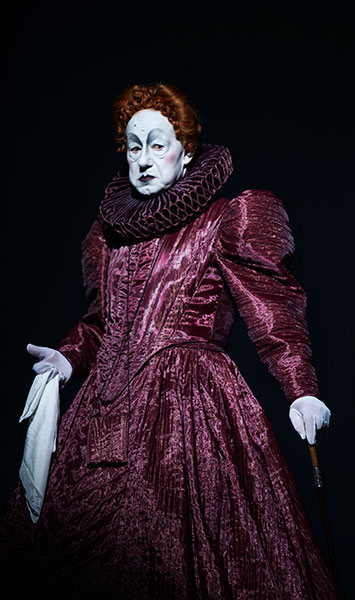 بوب ويلسون
鲍伯·威尔逊
בוב וילסון
ロバート·ウィルソン
밥 윌슨
Боб Уилсон
SHAKESPEAR`S SONETTES
Staging Shakespeare, not dramatic but lyrical: that was the intention of the American director Bob Wilson in Sonnets de Shakespeares (Sonnets de Shakespeare), a show on display at the Berliner Ensemble. To that end, Wilson is associated with American-Canadian composer and musician Rufus Wainwright. The result is a variety night, with reference to all genres of entertainment, from the commedia dell’arte to television sketches, passing through the cabaret. If in the Elizabethan era female roles were played by men, Bob Wilson did the same, creating this reverse practice: actresses play male roles. This inversion – Queen Elizabeth 1st, on her throne, declaiming a sonnet with a deep voice and Shakespeare himself, as a young man and an elder, in female voices – further intensifies the farcical tone of the show. So much so that even the sporadic number of transvestite actor Georgette Dee, microphone in hand, does not disagree much of the Shakespearean surroundings.