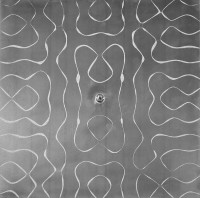 ’80 mesh – the shape of sound’ is a project that investigates fragmentation, reconstruction and repetition generated through the morphogenetic
possibilities of sound waves – visualized through the modeling of fine grain sand. the work was curated by ravenna-based cultural association
marte and born from a collaboration under the artists group CaCO3 – coordinated by daniele torcellini. the multidisciplinary artwork – informed by the research of the german physicist ernst chladni – is a device composed of three 50 x 50 cm
metallic plates that are placed horizontally alongside each other, with a quantity of garnet sand (80 mesh references the particles size)
homogeneously dispersed over the plates. the dishes were electrically linked to the sound waves produced by an onde martenot –
an early electronic musical instrument invented in 1928 with a similar sound to a theremin – played by ratsimandresy.
a transducer converted the electrical signals of the waves into mechanical impulses, and the sand, due to the oscillations of the plates,
produced many different structures in response to the wavelengths of the sound. the forms produced were either strictly regular,
symmetrical or would gradually grow to become more and more complex – the higher the frequency, the more detailed the patterning.
some wavelengths defined sharper forms than others, due to the resonant frequencies of the plates. during a ten day residency, ratsimandresy played a fifteen minute long piece that followed a strictly formalized procedure.
the plates were mapped in order to discover the resonant frequencies of each and a selection of those frequencies were used to create
a sequence of forms as a way to represent the personal choice of the musician. this means the composition was not realized from notes
but from the generated forms and, specifically, from a sequence of forms. the composition consists of three voices, one for each plate.