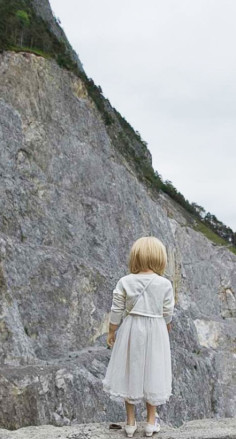 source:meliksetianbriggscom
Meliksetian | Briggs is pleased to present Mannequin Death, a collaboration between Richard Hoeck and John Miller. The artists’ second exhibition at the gallery features the video work of the same name juxtaposed with a group of new photographic works. The exhibition is an inquiry into the relationships between identification, subjectivity, desire, leisure and the sublime, as well as the opposition of the man-made and natural landscape.

In the video, a disembodied mannequin arm pushes various mannequin figures to their destruction down the rocky precipice into a quarry. The mannequins have been carefully outfitted in a variety of contemporary styles, much like department store mannequins emblematic of consumer culture, provoking a sense of identification and empathy in the viewer. Jarring and violent yet strangely hypnotizing, the video references the Kantian sublime landscape and the “sex appeal of the inorganic,” which, the Italian philosopher Mario Perniola argues, marks the transition from an organic, bodily sexuality to an inorganic and artificial one. There is also a clear reference to German Romantic painter Caspar David Friedrich’s lone figures, about which Miller states in relation to the video, “because these figures (often silhouettes) are clearly stand-ins for the viewer they constitute a kind of empty – or variable – subject position.” Juxtaposed with the video work are a series of photo works made at the empty golf course next to the cliffs where the video was filmed. The manicured, carefully styled man-made environment devoid of human presence is contrasted with the striking and awe inspiring natural landscape, heightening the Kantian void between the sublime and the merely beautiful. Notions of leisure and danger, or indeed death, alongside one another provide a liminal rupture, an antagonistic counterpoint and tension between the works.

Richard Hoeck (b. 1965, Hall, Tirol, Austria) currently lives and works in Vienna and Breslau, Poland and studied at Universität für angewandte Kunst, Vienna. Hoeck has exhibited widely in Europe and his work is included in the exhibition Franz West: Artistclub opening on December 14 at the 21er Haus, Vienna. Solo exhibitions include Kunsthalle Krems, Austria and the Galerie fuer Zeitgenoessiche Kunst, Leipzig, Germany. As well, as his collaborations with Miller and his own works, Hoeck has made collaborative works with Heimo Zobernig, Franz West and Mike Kelley. Hoeck was a participant in the artist in residence program at the MAK Center for Art and Architecture in Los Angeles in 2001/2.

Artist, critic and musician, John Miller (b.1954, Cleveland OH) has exhibited extensively since his first solo show at White Columns, New York in 1982. Major solo exhibitions include the 2016 solo mid career survey exhibition at the ICA / Institute of Contemporary Art, Miami curated by Alex Gartenfeld (catalog forthcoming), Musée d’art modern et contemporain (MAMCO), Geneva, Switzerland, a 2011 exhibition at the Museum Ludwig, Cologne in conjunction with his being awarded the Wolfgang Hahn Prize (cat.) and A Refusal to Accept Limits, a mid-career retrospective at the Kunsthalle Zurich curated by Beatrix Ruf in 2010 (cat.) Miller has participated many group shows and in numerous international biennials including the Whitney Biennial (1985, 1991), the Biennale de Lyon (2005) and the Gwangju Biennial (2010). In December, Miller’s work is featured in an exhibition at The Studio for Propositional Cinema, Düsseldorf, which runs concurrently with the exhibition at the gallery. Miller lives and works in New York and Berlin and his extensive exhibition and artwork archive can be found online at www.lownoon.com.
.
.
.
.
.
.
.
source:artspycn
理查德·霍克（Richard Hoeck）与约翰·米勒（John Miller）双人展“人体模型的死亡”（Mannequin Death）日前在洛杉矶Meliksetian | Briggs画廊举行。