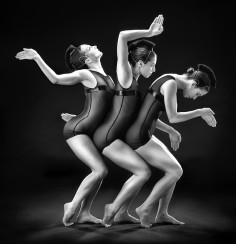 Using the 24 Preludes in Frédéric Chopin’s opus 28 as her source of inspiration, Marie Chouinard has choreographed this piece with a spirit that reflects her great facility in dealing with the demands of a classical form, musical in this instance. In this jubilant yet solemn work, the dance melds with the music for an energetic, stirring and resolutely contemporary whole.

Playing with the very structure of these preludes written for the piano, Marie Chouinard has created a pure, lavish piece. Guided by intuition and the melodic force of these free form musical pieces, she has fashioned a composite dance consisting of solos, duos, trios and group movements that marry gentleness with strength, and subtlety with rawness. 24 Preludes by Chopin is a choreographic work constructed of dynamic alternations that are constantly in touch with the music and the feelings it evokes, such as chastity, passion, introspection, ardour or rebellion. They are transposed by Marie Chouinard into states of agitation and practiced movement, a vast terrain of forbidden games sculpted by light.

An organic and organised inquiry into the foundational wavelength.

“My source has always been the body itself, and especially the silence and the breath which make up the “invisible” stuff of life. At the root of each new work there is always what I call the “mystery”, an unknown wavelength that calls out to me in an almost obsessive manner. My work consists of capturing this primordial wavelength, of “tuning” it in a sense, and of arranging it in space and time with a structure and form proper to it. Since 1978, this is what I have been doing: listening attentively to the vital pulsation of the body to the point of crystallising it in a new order. Each time, I start afresh from zero. Each time, I focus and re-direct my “antennae”, I seek out a new “state”, I track this wavelength until everything is in line, like in a reinvented classical structure in which, I hope, the viewer’s own “mystery” will be revealed to her.” – Marie Chouinard
2000

The international reputation of the Compagnie Marie Chouinard is the result of twenty-eight years of work by Montreal artist Marie Chouinard. Now a fixture on the world’s major stages and festivals, the company has its roots in Chouinard’s first creation in 1978, the solo Crystallization. This piece, which immediately earned her a reputation for originality, was followed by over fifty choreographic productions, action-performances, vocal works, installations and films, in which she refined her lifelong interest in formal research and the human body. From 1978 to 1990, Marie Chouinard performed alone throughout the world, developing a personal language with a universal resonance.

In 1990 she formed the Compagnie Marie Chouinard. In the works she has created since then, the choreographer has explored the poetics of the body in immediate, intelligible and ever-surprising ways. Each new piece is an odyssey through the history of humanity, while avoiding the chronology or linearity of a narrative. In work stripped to its bare essence, a theatrical, quasi-operatic effect is achieved, the elements of “living art” brought to the fore through various techniques of composition and staging. The dancer is presented as a singular entity, a being constructed before our eyes, whose rhythmic configurations are broken down into micro-divisions, analogous to the fluctuations of verbal communication. Although her works may be perceived as provocations, they are better viewed as pathways towards freedom and compassion, where humour is possible and Eros omnipresent. The architecture of the cosmos, the inner intelligence of the body and the inexhaustible complexity of its articulations and mutations harmonize in formally accomplished constructions in which style and substance are in perfect resonance.
.
.
.
.
.
.
.
source:icmgovmo
Ten dancers will perform 24 Preludes by Chopin and Chorale under the direction of the famous choreographer Marie Chouinard on Monday in the Macao Cultural Centre’s Grand Auditorium. This performance is one of the many gems to be featured in the 17th Macao Arts Festival beginning this Saturday.

Choreographer Marie Chouinard has lived in Nepal and Berlin, in Bali and New York. Her more than 50 works celebrate life and draw on inspiration from East and West. Chouinard’s artistry has won awards in America as well as Europe, and basked in the applause of audiences all over the world. She will prove in Macao why she is acclaimed as one of the best choreographers of our day.

For Marie Chouinard dance is a sacred art, and movement is the “phoneme” of the body’s thoughts. While 24 Preludes by Chopin calls upon the intelligence of the body to translate into dance the emotions evoked by classical music, Chorale gives an equal role to both voice and movement in the act of awakening universes both strange and familiar.

In creating the first piece Chouinard was inspired by Frédéric Chopin’s 24 Preludes op. 28. In this very solemn work she shows how easily she deals with the demands of a classical form, music in this instance. The dance and music combine to form a very contemporary whole.

This piece consists of solos, duos, trios and group movements that marry gentleness with strength, subtlety with rawness, and evoke human feelings such as passion, ardour, rebellion and introspection. Chouinard often explores the subtler states of mind.

On the other hand, Chorale is a festive universe that embodies the notions of sexuality and divinity. Considered by many to be one of her best pieces, this show invites to the stage ten dancers to demonstrate that words such as choreography and chorale share the same etymologic root. Corporeal and vocal architectures are then pushed to extreme. The dancers fashion irresistible pulsations that stretch them and throw them off kilter with breathless and ululating voices. Alone, in duets, or as a group, they call out to each other in situations that are intense, tender, humorous and very human.

In the same year that Chorale was staged Chouinard directed her first film, Cantique no. 1. From the same stock shots she created the multi-screen film Cantique no. 2 and, in 2004, the participative installation Cantique no. 3. The first film earned dancers Carol Prieur and Benoît Lachambre the prize for interpretation at the Moving Pictures Festival of Dance on Film and Video in Toronto in 2003.

Marie Chouinard has received several awards for her contribution to the world of dance and the arts in general. In 2003, in Ottawa, she received the National Arts Centre Award as part of the Governor General’s Performing Arts Awards. In the same year, she was also awarded the choreography prize of the Société des auteurs et compositeurs dramatiques (SACD) in Paris, France.

Compagnie Marie Chouinard has performed at numerous important events, among them the Venice Biennial, where they premiered the piece bODY_rEMIX/gOLDBERG_vARIATIONS in 2005.

The international reputation of Compagnie Marie Chouinard stems from twenty-five years of work by the Montreal director-choreographer. The company has performed all over the world since Chouinard’s first creation in 1978, a solo piece entitled Crystallization. This first work led to many more productions that established the choreographer’s originality and integrity. Choreographic works, action-performances, vocal works, installations and films have all sprung from Chouinard’s unwavering interest in formal research and the mysteries of the human body in all its aspects.

From 1978 to 1990 Marie Chouinard performed alone on stage, travelling throughout the world and absorbing various cultures, techniques and philosophies that she would transform into a personal language with a universal resonance.