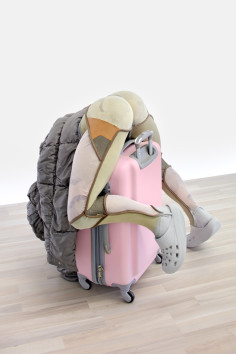 source:friezecom
It’s neither convenient nor cute to wake up at 5am to squeeze your entire life into a 10-kilo bag and schlep it to a regional airport for a budget airline flight. In fact, it’s pretty degrading, and often feels like some sort of contortion exercise at the hands of uniformed sadists. At this summer’s press preview for the 9th Berlin Biennale, it seemed hilarious and knowing that the first artworks you saw entering the Akademie der Künste were Anna Uddenberg’s recent sculptures of travelers who either collapse on their suitcases or writhe out of them – as if spawned by Samsonite. As part of the biennale, these sculptures (Transit Mode – Abenteuer [Transit Mode – Adventure], 2014-16) had an audience from all over the world, each making their way by plane, train or automobile to see humbling reality of modern travel reflected back at them. While mobility remains the utmost global privilege, privilege-with-a-capital-P is measured by hard cash and legroom within plane cabins.

The travelers that Uddenberg’s sculptures depict aren’t necessarily artists or curators but women with tribal tattoos who don Uggs, yoga pants, puffer jackets and complicated-looking camping backpacks. They’re women who were a few years ago colloquially called ‘basic’– the ultimate white-girl-on-white-girl insult (originating in hip-hop culture) which decries as naïve a woman’s identity, expressed through mainstream fashion and consumer options like Starbucks Pumpkin Spice Lattes and Crocs. The consumption patterns enacted by the work suggest aspirations to luxury: beige quilted fabric handbags and strollers are tilted at a weird angle, as if a sport utility vehicle popped out a baby.

The sculptures of women travelers shown at BB9 – one of the most memorable series of works in the exhibition – were shown in various manifestations earlier, but perhaps in their ultimate form at Uddenberg’s 2015 exhibition at Sandy Brown, Berlin. Their aspirational character is expressed by Uddenberg’s press release for that show, titled ‘Mystique 881 RPH’, after a model of a yacht. It’s not necessarily a particularly special yacht – it’s just a fantastic name, and Uddenberg is attracted to the often made-up lexicon of luxury. Take for example the description of the yacht’s probably not-very-comfortable shower, as taken from Uddenberg’s press release: ‘IRIDIUM COLLECTION [Marigold 2], VIP HEAD SHOWER BOX WITH MOSAICO FINISHING.’ The work included in the exhibition are more of Uddenberg’s gonzo basics. For example, BFF Twin Torso (2015) perches a set of breasty humanoid conjoined twins atop a coffee table while their hands come together to form a heart shape. Cutesy Counts (2015) finds a beleaguered traveler collapsing upon her pink 360° roller suitcase. She’s wearing Crocs, mesh and camouflage yoga pants that are wedgied up her butt crack, making her rear end appear impossibly round and peach-like. Looking at a litany of Uddenberg’s sculptures, you’ll realize she locates the lower back, or ‘tramp stamp’ area, as a particularly charged space on a woman’s body – it’s hardly ever left blank. Rather, in Uddenberg’s oeuvre it’s a tabula rasa upon which to denote one’s tribal affiliation – through whale tails or tattoos. The Clip (2015) is a grey butterfly hair clip sculpted by Uddenberg to gigantic proportion, and looks like the desiccated rib cage of a dinosaur. She told me in a recent studio visit she was particularly interested in this work because it looked both scary and sexy and once. This vagina dentata vibe would befit most of her work. At Sandy Brown, Uddenberg fit the space with plastic laminate floor lit with blue LEDs at the edges, turning the gallery into a showroom booth that could be found in Manhattan’s Chinatown – the ground zero of faux finishes.

It was in Frankfurt, where Uddenberg studied at Städelschule for six months in 2009 (she later transferred to the Royal Institute of Art, Stockholm), that Uddenberg started looking at escort pages around the world and took note of the language used to describe intimacy. In Frankfurt – with its burgeoning sex industry following the 2002 legalization of prostitution – Uddenberg got hung up on the phrase ‘girlfriend experience’. In the sex industry, this phrase describes a woman hired to act like your girlfriend – privileging intimacy over sex – but to Uddenberg it stood also for the emotional labor required of her as a woman in a male-dominated art world. Notably, Uddenberg makes all of her work by hand herself, which is not the norm among her Berlin-based peers (many of whom out-source production to companies such as Mixed Media). Her new sculptures at BB9 are carved in clay and then cast in fibreglass. While sculpting the human form in clay is a conspicuously traditional method of artistic production, Uddenberg works to update the female form in a long lineage of sculpture that has so rarely been authored by women themselves. The performance-oriented products she highlights respond indirectly to a mass-market, sci-fi sense of precarity that is today universally relatable. Her work highlights that the existing vocabulary to express female identity and precarity often takes the form of celebratory, fantastical and conformist consumer options.
.
.
.
.
.
.
.
source:032ccom
Twisted into a pretzel, ass up and selfie stick pointed at it; crawling into a stroller or bent backwards over a carry-on suitcase: Anna Uddenberg’s sculptures find themselves in positions we are inclined to describe as “compromising.” Cast from resin and plaster, dressed up in reflective thongs, dangly belly button piercings, puffy coats and crocs, their names are Lady Unique #1-3, Cutesy Counts or Journey of Self Discovery. Their flexibility is remarkable. The viewer’s impulse to describe their poses as above, or “degrading” even, is precisely what the Swedish artist is getting at. The point is that this is a narrative the viewer places upon the sculpture, not a pose it inhabits. “Giving the viewer everything that they need to be able to feel that they’re consuming art here is actually as superficial, if not more superficial. That whole idea of wanting something from art like that is very based on a consensus. It’s not breaking any rules,” Uddenberg addresses the conversation that has unfolded around her work, which exactly mirrors the concept at the heart of it.

In a 1972 episode of his TV programme Ways of Seeing, art critic John Berger dissects the tradition of the nude in European art history on the example of Susanna and the Elders. Painterly renditions of the biblical story often show Susanna looking out of the painting at the viewer, the “spectator-owner” as Berger calls him, or at herself in the mirror. “She sees herself first and foremost as a sight, which means a sight for men. Thus, the mirror became a symbol for the vanity of women, yet the male hypocrisy in this is blatant: you paint a naked woman because you enjoy looking at her, put a mirror in her hand, and call the painting Vanity, thus morally condemning the woman whose nakedness you have depicted for your own pleasure,” Berger observes pointedly.

The marginalized body is not easy to love. It requires a radical change of perspective to recognize its strengths rather than loathe it for the weaknesses it comes to stand for. Inspecting interpersonal relationships and power dynamics provides powerful insight here. Uddenberg’s practice is rooted in performance works like The Girlfriend Experience (2009). Inspired by the impersonal intimacy of the relationship between the escort and her customer, “I was trying to see how you perform being a girlfriend, basically. The term ‘girlfriend’ summed up a kind of character, and I looked into escort agencies to see how they would present themselves and their qualities. ‘Loving,’ ‘caring,’ ‘I’m an ultra feminine girl’ – I used to know this by heart. I found the language very similar to the language of a CV. How you promote yourself is personal, but also very generic. I do find it interesting how something that is supposed to be intimate actually contains clearly defined roles. A girl has a very clear set of personalities to be. These things are real. It’s not something that we pretend or make up. We live through these scripts.”

The power of Uddenberg’s work lies in her will and ability to embrace this irritating multiplicity: playing into societal ideas of the submissive femme also allows one to charge what is called stereotype tax, a toll paid by the person doing the stereotyping for their preconceived notions. “What happens when you take on the role of the listener, when you’re actively listening to someone? In these power relations, you can creep up from underneath and rule the situation. You end up being on top, from the bottom.”

Who submits and who dominates is not always clear. “Cuteness can be utilized to direct people around you,” says the artist, “femininity is something you perform, and it’s about aesthetics.” Four waves of feminism in, what is widely perceived as strong, independent, powerful is still aligned with traits historically perceived as masculine. Uddenberg’s sculptures refuse to conform to this essentialism. Instead, they confront their audience with how it understands feminine appearances and characteristics: is she vulnerable, or is she flexible? Is this dichotomy real? Is she posing, and if so, for whom? Who is she? Perhaps posing more questions than they make statements – does it get more femme than that? – one thing you cannot help but realize looking at them, really looking at them, is: Don’t underestimate her.