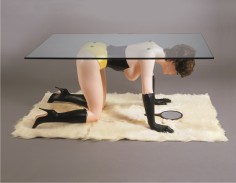 source:tateorguk
Allen Jones (born 1 September 1937) is a British pop artist best known for his paintings, sculptures, and lithography. He was awarded the Prix des Jeunes Artistes at the 1963 Paris Biennale. He is a Senior Academician at the Royal Academy of Arts.

Jones has taught at the Hochschule für bildende Künste Hamburg, the University of South Florida, the University of California, the Banff Center School of Fine Arts in Canada, and the Berlin University of the Arts. His works reside in a number of collections; including the Tate, the Museum Ludwig, the Warwick Arts Centre and the Hirshhorn Museum. His best known work Hatstand, Table and Chair, involving fibreglass “fetish” mannequins, debuted to protests in 1970.
.
.
.
.
.
.
.
source:alancristeacom
Allen Jones was born in 1937 in Southampton, England. He studied painting and lithography at Hornsey College of Art, London, from 1955 to 1959 before enrolling at the Royal College of Art, where his fellow students included Peter Phillips, David Hockney and R.B. Kitaj. Jones and his contemporaries became instrumental in the birth of British Pop Art.

Jones is best known for his sculptures, paintings and prints incorporating female figures. His sexually charged early works, with their provocative eroticism, have, over the years, given way to more stylised, lyrical compositions often involving elements of performance such as fashion shows, dancing and cabaret. As a printmaker, working mostly in lithograph and screenprint, Jones has built up an impressive body of work and the first retrospective of his graphic work was held at the Barbican Art Gallery, London in 1995.

Aside from the numerous pop art surveys in which his work is always a central component, Jones has had solo exhibitions at Royal Academy of Arts, London (2014, 2007); Kunsthalle Tübingen, Germany (2012); Kunsthalle, Villa Kobe, Halle/Saale (2002); Kunsthaus, Hannover (2001) and Skulpturen-Garten der Stadt Wien, Vienna (1999). Dedicated room displays have been presented at Tate Britain, London (2007) and the Royal Academy of Arts, London (2002). In 1979 a touring retrospective opened at Walker Art Gallery, Liverpool and toured to Serpentine Gallery, London; Sunderland Museum and Art Gallery; Staatliche Kunsthalle, Baden-Baden and Kunsthalle, Bielefeld.

In 1963 Jones received the Prix des Jeunes Artistes at the Paris Biennale, and in 1986 he was elected to the Royal Academy of Arts. From 1990 – 99 he was a trustee of the British Museum, London.

Allen Jones lives and works in London.
.
.
.
.
.
.
source:royalacademyorguk
This long-overdue appraisal spans the entire career of British Pop artist Allen Jones, from the 1960s (when alongside peers like Hockney and Caulfield he was closely associated with the rise of Pop Art) to the present day.

Abandoning a chronological approach, we trace connections and themes over the decades. What emerges is a visual language fusing painterly tradition with the iconography of city life, theatre, and advertising – a language inspired by American consumer culture and the crisp graphics of Warhol and Lichtenstein.