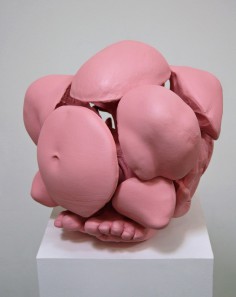 source:latimescom
“Conceptual Craft,” the name of a spirited show at Denk Gallery in downtown Los Angeles, might seem at first to be a contradiction in terms. Conceptual, after all, implies an idea, a product largely of mind, while craft is grounded in materiality and generated by the hand. More than ever, though, art flouts categorical definitions, and “Conceptual Craft” takes the presumption of either/or and turns it into an exultant and.

The Denk show features eight artists who revel in a kind of play, heady and tactile. They adopt their materials with exacting deliberateness, often setting in motion a visual pun or witty self-referential turn. In Lynn Aldrich’s “Sprinkler,” for instance, multicolored garden, irrigation and fuel hoses evoke a fountain. Pontus Willfors’ irresistible “Rocking Chair” appears to return itself back to nature, its beech slats extending outward, splitting and twisting into a rooty bramble.

Tim Hawkinson is always good for a deep chuckle, and he delivers here with “Gumball,” a bubble-gum-pink sphere of cast body parts — feet, elbows, tummy, rear — a compact mutant portrait that begs to be rolled across the floor. Works by Jared Pankin, Ashley Hagen, Ephraim Puusemp and Nova Jiang also ripple with surprises, but the show assumes the most emotional heft in Jeff Colson’s three sculptures.

Each features an object on a base, but the pedestals, instead of being neutral supports, are pieces of furniture reconstructed from memory to replicate those from Colson’s childhood home, scuffs and all. The sculptures that rest on them appear to be assembled of wood scraps but are actually resin. One looks suspiciously like a cubist head by Picasso — and that seemingly errant drop of red paint on the cabinet top it sits on coyly marks it as sold. The other two sculptures evoke improvised shelters, echoing the work of Beverly Buchanan as well as recent natural disaster coverage.

These different modes of domesticity — one warmly glowing with nostalgia, the other reeking of instability — converge with aching poignancy. Throughout the show, head and hand ally consistently, cleverly. In Colson’s work especially, heart joins in too.
.
.
.
.
.
.
.
source:pacegallerycom
Tim Hawkinson’s (b. 1960, San Francisco) idiosyncratic creations are meditations on nature, machines, mortality, the body and human consciousness. Since the 1980s, the artist has used common found and store-bought materials, handcrafted objects, and machines to shift familiar subject matter off-kilter, creating visual conundrums and conceits imbued with deeper meaning. His inventive works range in size from monumental kinetic and sound-producing sculptures to almost microscopic pieces created from such unassuming materials as fingernail clippings and eggshells. Driven by ideas, materials, and an interest in transformation, Hawkinson continues to create unlikely and thought-provoking associations by transforming common materials into works of art. Hawkinson joined the Gallery in 2005.