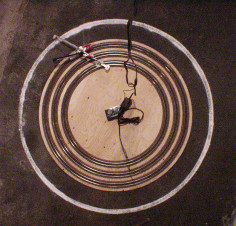 Joseph DeLappe is the Professor of Games and Tactical Media at Abertay University in Dundee, Scotland where he relocated early in 2017 after 23 years directing the Digital Media program at the University of Nevada, Reno. A native San Franciscan, he has been working with electronic and new media since 1983, his work in online gaming performance, sculpture and electromechanical installation have been shown throughout the United States and abroad ‐ including exhibitions and performances in Australia, the United Kingdom, China, Germany, Spain, Belgium, the Netherlands, Mexico, Italy, Peru, Sweden and Canada. In 2006 he began the project dead‐in‐iraq , to type consecutively, all names of America’s military casualties from the war in Iraq into the America’s Army first person shooter online recruiting game. In 2013, he rode a specially equipped bicycle to draw a 460 mile long chalk line around the Nellis Air Force Range to surround an area that would be large enough to create a solar farm that could power the entire United States. More recently he developed the concept behind “Killbox”, an interactive computer game about drone warfare created with the Biome Collective in Scotland. Killbox was recently nominated for a BAFTA Scotland (British Academy of Film and Television Arts) as “Best Computer Game”.

He has lectured throughout the world regarding his work, including the Museum of Modern Art in New York City. He has been interviewed on CNN, NPR, CBC, the Australian Broadcasting Corporation and on The Rachel Maddow Show on Air America Radio. His works have been featured in the New York Times, The Australian Morning Herald, Artweek, Art in America and in the 2010 book from Routledge entitled “Joystick Soldiers The Politics of Play in Military Video Games” among many others. He has authored two book chapters, including “The Gandhi Complex: The Mahatma in Second Life.” Net Works: Case Studies in Web Art and Design, (New York, Routledge 2011) and “Playing Politics: Machinima as Live Performance and Document”, Understanding Machinima Essays on Filmmaking in Virtual Worlds, (London, UK, Continuum 2012).
.
.
.
.
.
.
.
source:delappenet

A train locomotive travels continuously in a circle harnessed with electro-mechanical appendages, including a drawing arm holding black compressed charcoal to paper. The train rides on the first rail, while the two inner rails function, respectively, to power the mini-video camera mounted on the train while the other sends the real-time video signal from the camera to the projector. Video as memory of action in the immediate past—over engineered uselessness for the watchful creation of drawings on paper.
.
.
.
.
.
.
.
source:abertayacuk

I’m an artist, lecturer and a native San Franciscan. After 23 years directing the Digital Media program at the University of Nevada, I relocated to Dundee in 2017.

My work in online gaming performance, sculpture and electromechanical installation has been shown all over the world but I am perhaps best known for my art intervention pieces exploring contemporary issues in politics.

My 2006 online gaming protest dead-in-iraq memorialised the name of every service person who died in the Iraq war by typing their names into the US Defense Department’s America’s Army online shooter game.

More recently I developed the concept behind Killbox, an interactive computer game about drone warfare created with the Biome Collective which was recently nominated for a BAFTA Scotland in the Best Computer Game category.

As an artist/activist, I believe it’s essential to engage in and challenge the norms and expectations of the digital present and the larger cultural context by informing, provoking and questioning.

My work has been shown internationally at galleries, museums, festivals and thru online and real world interventions. I’ve lectured extensively as well, including a talk presented at the Museum of Modern Art, NYC among many others.

My work has been featured in the New York Times, The Australian Morning Herald and Art in America. In 2017 I was awarded a Guggenheim Fellowship, one of the top prizes in the United States for practicing artists. For more information regarding my creative work and to access a full vitae, visit my website: http://www.delappe.net