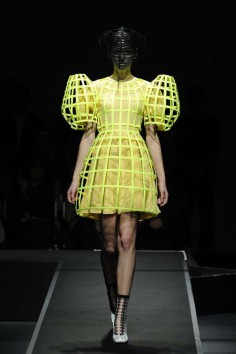 source: businessoffashioncom
Kunihiko Morinaga has built a strong following in his native Japan and a burgeoning international reputation for his cerebral designs. Born in Tokyo in 1980, Morinaga studied at Waseda University and the Vantan Design Institute. In 2003, Morinaga founded his brand Anrealage, The designer first showed in 2006, when he collaborated with fellow designer Keisuke Kada on a guerrilla show in Tokyo.

Each of Morinaga’s collections is germinated from the exploration of one particular theme. Past collections have explored “Bone”, “Shape” and “Colour,” with the latter seeing models dressed in white parade down a runway lit by UV lights, to spectacular results. In collaboration with Trident, Morinaga worked on a project dubbed “Focus”, which saw the designer develop phone signal repelling garments after feeling the strain technology placed upon himself and others during fashion week.

In 2005, Anrealage won the Design Vision Award For Avant Garde at Gen Art competition for new designer in New York; in 2011, it won the 29th Mainichi Fashion Grand Prix for the best new designer in Tokyo; and in 2014, the brand began showing at Paris Fashion Week. The brand also collaborated with Amazon in 2018.

Morinaga is one of eight finalists for the 2019 LVMH Prize.
.
.
.
.
.
.
.
source:anrealagecom
Designer Kunihiko Morinaga, is a Waseda University and Vantan Design Academy graduate born in Tokyo in 1980. In 2003, he launched ANREALAGE, its name a combination of ”A REAL, UNREAL and AGE.” His designs originate in discoveries of easily-overlooked, subtle twists in the fabric of our everyday life that create touches of unreality. Working with the mantra, “God is in the details,” his designs are known for their brightly-colored, finely-detailed patchwork, garments with creative shapes unbeholden to the human body, and garments that actively incorporate technology and innovative techniques. Anrealage won the Design Vision Award For Avant Garde at Gen Art in New York in 2005, and made its first appearance in the Tokyo Collection the same year (2006 S/S). In 2011, Morinaga was awarded the 29th Mainichi Fashion Grand Prix for best new designer and the Shiseido Incentive Award. In 2014, he made his Paris debut with his 2015 S/S collection. He was selected as an ANDAM Fashion Awards finalist in 2015. In 2016, he opened the ANREALAGE AOYAMA store in Minami Aoyama, Tokyo.

ANREALAGE
Designer Kunihiko Morinaga established ANREALAGE in 2003, branding it with a name that combined “A REAL, UNREAL, and AGE.” Based on the garments produced over the subsequent 15 years, Anrealage’s activities can be broadly categorized into three periods. (www.anrealage.com)