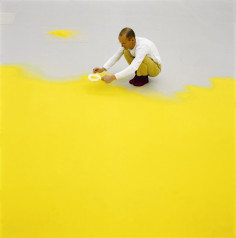 source:artinamericamagazinecom
Wolfgang Laib’s sculptural materials include beeswax, pollen, stone, milk and rice. Beeswax is used in large amounts to build towering ziggurat sculptures and caves, such as the one he constructed in the French Pyrenees, which is accessible only by footpath. Pollen, on the other hand, is available in only small amounts, and he collects it over many years from the bushes and wildflower fields surrounding his exquisite German home. For him, these substances are not a means toward creating art, but the art itself.

Though trained as a doctor, Laib changed his direction after medical school and began creating his now iconic “milkstones,” slabs of polished marble with a thin layer of fresh milk sitting atop their surfaces. His work emits a subtle spiritual resonance, as does Laib himself, who speaks simply and with monastic restraint. In addition to his home in Hochdorf, Germany, he divides his time between an apartment in Manhattan and a small village in India.

Laib met with A.i.A. in the atrium at MoMA, where his largest hazelnut pollen installation is on view through Mar. 11. He will continue to maintain and clean the pollen every few days until the exhibition closes, at which point he will retrieve the material and recycle it for his next installation.

ROSS SIMONINI How did you come to be an artist?

WOLFGANG LAIB I began to study medicine, but I was dissatisfied with it. The more I went into the world, the more I felt that art is the most important thing, and therefore I became an artist.

SIMONINI Why did you think art is important?

LAIB Because, somehow, it includes everything. Medicine is a natural science, and politics does a certain thing, but art is something that is so open, and has so many potentials. I think science can be incredibly good, but it’s very narrow.

SIMONINI How do you view the current art world?

LAIB I feel much more close to art which happened 2,000 years ago in Asia or in Africa. I think we came to the point where every other year, or every other week, something has to happen. But that’s a disaster. And somehow, I feel the opposite. When I go to the Metropolitan Museum, I feel very close to something 2,000 years old. Like Egyptian art, or a Mesopotamian art, or something which is very far from our own culture, but which is a challenge to our thinking.

SIMONINI For you, does your work have a relationship to 20th-century art?

LAIB No. Of course, an art historian can say, this has a relationship to Joseph Beuys, which is most probably correct, but from my side, it’s very important to create something from my inner self.

SIMONINI Do you feel any connection to Germany?

LAIB No. The Germans don’t want to be German at all, but there is a very long tradition of German philosophy and German thought, which I am very close to.

SIMONINI Would you say that there is a lot of thought and philosophy in your work?

LAIB I mean, you could see a pollen piece and you could have a visual experience. It’s an incredible color, like you can’t see anywhere else, but if art would be only a visual thing, or a color, or a pigment, I wouldn’t be an artist, I wouldn’t want to be an artist. A milkstone is not a white painting, and a pollen field is not a yellow painting, like Rothko’s. It’s something much, much more. And it’s also not a blue painting. It’s like the blue sky.

SIMONINI But at the same time, you seem resistant to talking about your art in terms of the thought behind it.

LAIB I want to leave it open. Therefore I would never give a really honest talk. It’s also not very important what I feel is behind the work. It is what it is. It’s not even important what I have to say about it. It’s important that I put it into this context, into the art world.

SIMONINI Do you have a resistance to language?

LAIB No, I think from the artist’s side, if I were to say too much it would be problematic. But from the outside, there can be—

SIMONINI That doesn’t bother you? Critical discourse about your work?

LAIB Not at all.

SIMONINI A lot of connections are made between your practice as a doctor and your work. Do you think you apply the kind of thinking you learned in school to your work?

LAIB I think I never changed my profession. I feel I did with my art what I wanted to do as a doctor. That is, for me, very important. And somehow people from the outside think that it is totally separate, but for me it is not. And I could not have done this work without studying medicine. The milkstone was really the direct answer to my medical studies. There was so much tension built up, over these years, and I could finally say everything I wanted to say, in a very simple artwork. The doctor today is somehow responsible for your physical body, he studies your lab tests and this and that, but beyond this, he has no idea how to handle the person.

SIMONINI You often use the word “beautiful” to describe your work.

LAIB Artists hate that word, especially German artists. If you wanted to be really hated in Germany, then you would say, “My work is beautiful.” German artists believe in ugliness and nastiness. I think beauty can be something extremely important in our lives. And it’s not true that this is naive. This is what is the most needed: inner beauty and outer beauty, which is an incredible challenge for us.

SIMONINI Are you interested in your work affecting larger groups of people in some way, as a social change? Is this interesting to you?

LAIB Yes. I find that such a pollen piece here, in the main space of MoMA, is a real statement, not only by me, the artist, but also by the museum. This is something that is very challenging.

It seems so simple, it’s just a yellow square, but if you really think what it is, and what is behind it, then it’s a real challenge to everything in the world. So it’s a real social challenge, on many levels.

SIMONINI Have you seen work that has been a sort of catalyst for the change you are interested in?

LAIB I find that art is always much more important than politics. There are wars, and the kings do this or that, but I think art and culture has much more impact on the changing of humanity.
.
.
.
.
.
.
.
source:hyperallergiccom
We at Hyperallergic pride ourselves as the best possible source for all allergy-related matters in the art world, so you could imagine that we became very concerned when we heard Wolfgang Laib’s “Pollen from Hazelnut” installation will be coming to the atrium of the Museum of Modern Art. We reached out to the museum for clarification about the installation and received this response:

The MoMA presentation of Wolfgang Laib’s “Pollen from Hazelnut” follows a long history of the artist’s work with natural materials. The artist has created pollen fields dozens of times over 36 years, in high profile, highly trafficked museums and institutions around the world, for as long as one year, with no known incidents. For the MoMA installation, the artist is incorporating the same materials in the same manner.

While that is a very reassuring response, the allergic individual that I am can’t help but feel some anxiety at being confronted with a large patch of hazelnut pollen. I remember turning a corner at the Hirshhorn Museum a few years ago and seeing a version of Laib’s “Pollen from Hazelnut” on the floor. I am happy to report that I didn’t experience a reaction, but like anyone who has severe allergies I walked far away from the work to admire the yellow glow from afar. That memorably anxious experience in Washington, DC, is one of the reasons we placed Laib’s work on our “8 Deadly Works of Art” list back in 2010.

Some facts about hazelnut allergies:

Allergy to hazelnut is more common in Europe than in the United States. Hazelnut pollen is a common cause of seasonal hay fever, and it appears that a person with hazelnut pollen allergy is at risk for food allergy to the tree nut itself. Hazelnut is also related to birch pollen, and therefore people with birch pollen allergy may experience oral allergy symptoms with eating hazelnuts. People with hazelnut allergy may also be allergic to coconut, cashews, peanuts, and soybean given the similarity between the allergens in these foods.

Did I mention I was really really allergic to birch?

I usually like to joke that I never became a food critic because a nut allergy would’ve proven difficult to overcome when reviewing a restaurant known for a certain nut-infused dish or nutty dessert, but I haven’t had much of a problem in the art world, not yet, anyway.