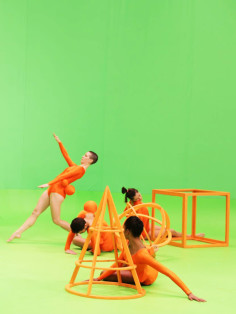 source:rashaunsilasdancecom
Tesseract is a collaboration between Charles Atlas, Rashaun Mitchell, and Silas Riener. It is an evening-length presentation in 2 parts separated by an intermission: a 3D dance film featuring 7 dancers and a live proscenium performance with 6 dancers. The film offers speculative worlds and alternate possibilities in bold visual environments. The performance includes live-video capture with multiple cameras, mixed by Atlas and projected into the stage space. Images obscure and reveal moving bodies behind a translucent scrim, magnified and refracted by Atlas. Through collective action we forge a link between human ritual conjuring and new technological magic. Between the past and the future.

Tesseract ⚪ by Charles Atlas / Rashaun Mitchell / Silas Riener was co-commissioned by EMPAC / Experimental Media and Performing Arts Center at Rensselaer Polytechnic Institute, the Walker Art Center, the Museum of Contemporary Art Chicago, and On the Boards.

Tesseract was made possible by the New England Foundation for the Arts’ National Dance Project, with lead funding from the Doris Duke Charitable Foundation and The Andrew W. Mellon Foundation. Additional support from the New York University Dean’s Grant adminstered by the Tisch School of the Arts. Tesseract was developed, in part, through residencies at EMPAC/ Experimental Media and Performing Arts Center at Rensselaer Polytechnic Institute, The Watermill Center, and the Walker Art Center.

Tesseract ◻ photos by Mick Bello / EMPAC. Tesseract ⚪ photos by Ray Felix / EMPAC.
.
.
.
.
.
.
source:
Tesseract means hypercube, that is, a tridimensional solid that moves into the fourth dimension. If this sounds like too demanding a notion on which to peg a performance work, well, it is and it isn’t.

Tesseract, the show currently having its European premiere as part of the Barbican’s 2019 Life Rewired season, is primarily a play on dimensions in two parts: firstly a 3-D video (special glasses are provided) followed, after the interval, by a live performance where video also plays a significant part.

It’s the joint creation of Charles Atlas, the American pioneer of time-based visual art, and Rashaun Mitchell and Silas Riener, choreographers and dancers formerly with the ground-breaking company of the late great Merce Cunningham.

The video starts with an image of a starry sky on which the work Tesseract slowly forms. Then we’re into a sequence of chapters where six dancers perform in a variety of settings that go from a black and white set, all straight lines and rectangles (pictured up top) to a bright orange moonscape, dotted with tridimensional geometric solids.

The quality of the images is hyperreal, that of the settings often surreal. There is, for example, a psychedelic interlude where the dancers writhing on an askew plane are infused with violently heightened colours. And there is a very affecting sequence where two men, Rashaun Mitchell and Silas Reiner, placed in a forest of pastel coloured ropes, slowly circle each other with their faces seemingly glued together, before breaking apart.

Throughout all chapters the dances have much that is recognisably Merce Cunningham, straight windmilling arms, bodies suddenly creating right angles as the torso bends sideways, straight-legged hops, within a syncopated perpetual motion.

Part one is perhaps overlong; and dazzled as you may be by a succession of highly original, eye-filling images, colours and technical processes (Tesseract is very much a hymn to technology), there isn’t enough in the choreography to anchor the work.

Part two (beautifully lit by Davison Scandrett) is rather more engaging. The six dancers are now live behind a scrim and as they dance, first encased in see-through loose netting pyjamas, then stripped down to white bodies, they are filmed by a cameraman in a bright crimson tunic with glitzy silver trainers.

Aspects and distortions of their dancing (to a score by Mas Ysa) are projected onto the scrim, providing new perspectives and a fourth dimension to the stage. It’s all terribly clever, but not so as to be intimidating.

The choreography for this second part is more varied and versatile, and goes beyond the Cunningham vocabulary. At first isolated individuals performing the same steps in unison, the dancers gradually form into groups that interact with each other and with the cameraman, providing a never-ending sequence of relationships.

There is no emotional content to this interrogation of man’s relationship with fast moving and seemingly overwhelming technology; but there is a very satisfying aesthetic quality to the way in which their interaction is presented.

So, Tesseract is very much a show of two halves: demanding viewing if you try to apply the rather complicated programme notes to every step and perspective on stage; a little less so, if you can just relax into it and enjoy an intelligent, often arresting visual feast – and all beautifully danced by its six-strong cast.
.
.
.
.
.
.
.
source:empacrpiedu
Charles Atlas, Rashaun Mitchell, and Silas Riener
The new two-part work, Tesseract, by artist Charles Atlas and choreographers Rashaun Mitchell and Silas Riener, will be presented for the first time following several years of development at EMPAC on Friday, January 27th and Saturday, January 28th both at 8PM.

The evening will commence with the world premiere of the stereoscopic 3D video Tesseract ▢. A six-chapter work of science fiction, it is Atlas’ first “dance video” in over a decade. Filmed with a mobile camera rig that moves with the choreography, Tesseract ▢ traverses a series of hybrid and imagined worlds staged and filmed over a series of EMPAC production residencies. Each chapter combines a specific set, choreography, and camera motion to encompass pas de deux and ensemble pieces, choreographed and performed by former Merce Cunningham dancers Mitchell and Riener. Manipulating the 3D footage to combine live dance with animation, Atlas’ distinctive video effects reach into otherworldly dimensions beyond the stage.

For the second part of the evening, Tesseract ◯ expands the view from film frame to proscenium stage. A performance for six dancers and multiple mobile cameras—the footage of which Atlas will manipulate in real-time and project back onto the stage—Tesseract ◯ superimposes the space of dance with live cinematic production, rendering a choreographic analogue to the four-dimensional cube from which the piece takes its title.