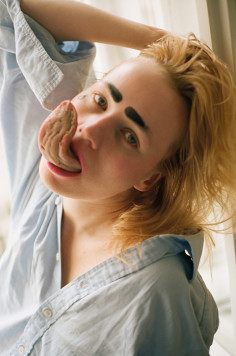 source:lakesidekunstraumat
Kris Lemsalu uses masquerade as a means of expression when staging her performances and installations. The artist spirits us away to a fantasy world, where she however grapples with universal concerns of today such as desire, sexuality and transformation. Drawing on a feminist tradition of performance and staged photography, she combines disparate elements such as human and animal body parts made of ceramic with skins, fabric and garments. Her image cosmos is populated by hybrid creatures that paraphrase ancient mythologies and resonate with ritual elements from different cultures. In her self-portraits, Lemsalu often re-invents herself as a being with both male and female characteristics. Deftly combining textiles, makeup, wigs and other props, the artist creates exotic temporary identities, which can be used for a specific purpose and then discarded again. An obsessive spirit is inherent in these “performances,” which is in turn counterbalanced by intelligence and a sense of humor, allowing for a nomadic roaming from one scene to the next. Life experience and the field of art meld into a single inseparable unity. The stagings are fluid and designed to incorporate constant change and potential rearrangement.

Kris Lemsalu (b. Estonia, 1985) lives and works in Tallinn and Wien.
.
.
.
.
.
.
.
source:newsartnetcom
The first time I meet artist Kris Lemsalu, she is wearing a Medusa-like piece of rubber headgear, makeup reminiscent of a Russian nesting doll, and a vibrantly-colored old pantsuit that once belonged to a Bolivian witch.

You might not know exactly what she looks like, because her likeness is constantly shifting. But you know her when you see her. The same goes for her practice, which is a meandering blend of performance, ceramic sculptures, and theatrical multimedia installations.

The Estonian artist’s introduction to American audiences came in the form of a performance at Frieze New York back in 2015, when she lay prone inside a 220-pound ceramic turtle shell for hours on end. Her limbs dangled out from the massive sculpture while she lay face down on a waterbed. It was a fitting debut: for Lemsalu, the lines between her own body and her art, found objects and performance, as well as fantasy and reality, are all extremely blurry.

But whether in regalia or hiding under a tortoise shell, just a few years ago, Lemsalu was little known beyond a few privileged art circles in continental Europe. But in a tired-out art world, Lemsalu’s mixture of fantasy is like an imaginative antidote. To quote LA-based art critic and curator Andrew Berardini in his reflection on Lemsalu’s work: “In the middle of the thrum and cacophany of industry trading, of flashy luxury goods mixed with authentic heart songs all for a price, who wouldn’t want to turtle?”

Last year, the sculptor-as-performance-artist presented back-to-back solo shows at the historic Vienna Secession and at the new Goldsmiths Centre for Contemporary Art in London. In 2017, she blew audiences away with a live performance that melded sculpture, video, and sound at Performa in New York and then at the David Roberts Foundation in London.

Soon, Lemsalu will welcome an ever wider audience into her fairytale storybook. She is currently preparing to represent Estonia at the Venice Biennale, which opens May 11.
.
.
.
.
.
.
.
source:robertgrunenbergberlin
Kris Lemsalu drew the art world’s attention at Frieze Art Fair 2015 in New York, when she lay motionless on a waterbed underneath a giant ceramic turtle shell for eight hours a day for her work ‚Whole Alone 2’, 2015. Lemsalu, who will represent Estonia at this year’s @venice.art.biennale, has a reputation for pushing materials to unexpected and sometimes subversive places, often combining ceramic sculpture with found materials suggesting ambiguous narratives or becoming stages and props for performances.
In „Metamodernity“ Lemsalu shows the ceramic works ‚Phantom Camp‘, 2014 and ‚Immaterial Love‘ , 2018 as well as ‚Blanket 4‘ and ‚Blanket 5‘, 2017, consisting of porcelain, textile and mixed media, evoking bizarre and funny yet sincerely empathic narratives.