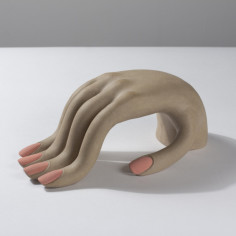 source:designboomcom
With ceramics sculpted in porcelain and stoneware pigmented in pastel hues, genesis belanger’s series entitled ‘holding pattern’ culls the uncanny from the everyday. exhibited at new york’s new museum, such mundane items as cigarette stubs, soda cans, handbags, and stray pills are rendered strange as they become surrogates for the body, evoking both comfort and disquiet. while belanger introduces references from pop art, surrealism, and seventeenth-century dutch paintings, her work remains acutely attuned to contemporary archetypes. the smooth and supple elegance of her forms often contrasts with their darkly humorous insinuations relating to subjects such as mass production and chemical dependency.

‘holding pattern’ at the new museum expresses the influence from liminal spaces where one might dwell in a state of limbo. these spaces include office waiting rooms, hotel lobbies, or airport lounges. belanger’s objects invoke this liminality through their posture, often seeming limp or wilting as if they had been left or forgotten over time. viewers peer through the window onto a receptionist’s desk adorned with office supplies and an uneaten lunch, while an open desk drawer reveals items one might consume in order to cope with the stresses of daily life such as candy, a bottle of liquor, and pill packets.

a low bench with two grinning lamps faces visitors between a color-paneled curtain punctuating the threshold between the windows. this barrier serves to divide the space of waiting from that of anticipation. ceramic bricks wrapped with notes are scattered throughout with the implication of waiting to be pitched through a window allowing those trapped in purgatory to break free. curated by margot norton, ‘genesis belanger: holding pattern’ joins a new series of storefront window installations that relaunches a program the new museum originally mounted in the 1980s.
.
.
.
.
.
.
.
.
source:thisiscolossalcom
Genesis Belanger twists and stretches familiar objects into surreal scenarios with her stoneware, porcelain, and concrete sculptures. The Brooklyn-based artist frequently depicts detached limbs, misplaced teeth, and unusually located food in her work. One sculpture shows a mustard-topped hot dog disappearing into a handbag with a mouth-like zipper; another series dispenses rocks from dysfunctional quarter candy machines. This spring, a stoneware desk topped with flaccid pens, a tape-like tongue dispenser, and a drawer full of coping mechanisms was on view in the New Museum’s store window gallery. Belanger earned an MFA at Hunter College and a BFA at the School of the Art Institute of Chicago. Explore more of her unusual sculptures on her website and Instagram.