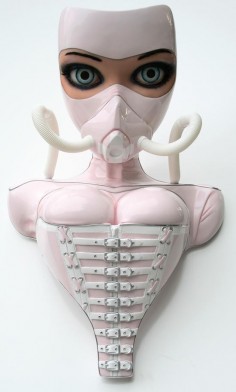 source:colinchristiancom
Born in London on March 30th 1964 to a loving and outgoing mother. He hated school and apart from art classes found the whole thing rather frustrating and useless. At the age of 15 he left school and lived for a year in Morocco with his mother, brother and sister. The cultural difference was very liberating. Upon his return to England at 16 he worked at a record music store and in 1982 became a DJ and was a stage manager for a large nightclub in the south of England. This is where he met his wife Sas in 1989.

In 1992 Colin moved to the U.S where he and his wife started a small business making latex clothing for fetish stores around the country. Their work was featured in Penthouse and Skin Two magazines. Taking what he had learned from the clothing manufacturing and combining it with his interest in movie special fx, Colin started to produce fiberglass figures and displays. In 1998 he produced his first production figure, an anime girl called “Suki” – a towering 7 feet tall and anatomically correct.

Colin decided to put his career on hold for a few years to take up commercial sculpture. Sas was developing as a painter and if this was to be encouraged she had to be able to devote herself full time, learning how to paint. The commercial work paid the bills for both of them and would support them both until Sas was ready to support herself. During this time Colin produced pieces for stores, museums and various businesses. A robot he made for the American Heart Association was interviewed by Katie Couric on the Today show and he also constructed the worlds largest mousetrap for pest control company Truly Nolen, which is now featured in the Guinness Book of World Records.

Colin now works full time on his original sculptures, finding inspiration in old sci-fi movies, pinup girl/supermodels, anime, ambient electronic music and H.P. Lovecraft. In 2004 he started using silicone in his sculptures, a difficult material to use but one that helps him achieve his goal of true cartoon realism, a line drawing made flesh. He is not looking to create every imperfection and flaw, but to take the exaggerations and perfections of cartoons and make them into a realistic 3D form.
.
.
.
.
.
.
.
source:mutualartcom
Colin Christian is a British Postwar & Contemporary artist who was born in 1964. Their work was featured in several exhibitions at key galleries and museums, including the Stephen Romano Gallery. Colin Christian’s work has been offered at auction multiple times, with realized prices ranging from $1,250 USD to $7,673 USD, depending on the size and medium of the artwork. Since 2014 the record price for this artist at auction is $7,673 USD for Solaris Head, sold at Leonard Joel, Melbourne in 2016. In MutualArt’s artist press archive, Colin Christian is featured in Corey Helford Gallery’s 10th Anniversary Gala Exhibition, a piece from the JUXTAPOZ in 2016.