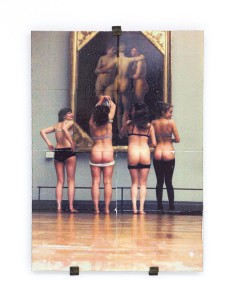 Thomas Mailaender (born 1979) is a French artist living and working between Paris and Marseille known for his use of a wide range of media and his experimentation with printing processes, fixing strange and humorous found imagery onto the surface of ceramics, photography and sculpture. The resulting objects teem with curiosity and a sense of the bizarre, pairing traditional, historical techniques with today’s prolific digital visual culture.

The source of images used in Mailaender’s work is the artist’s ‘Fun Archive,’ a collection of absurd, amateur photographs he started amassing from the internet since 2000. Once applied to their intended surface or material, and removed from context, the resulting objects are transformed into monuments to contemporary culture. Using humour as a provocation, Mailaender’s work raises questions not only about the role of the artist, but also about the absurdity of the everyday and the pretensions of the art world.

For his show at the Michael Hoppen Gallery, Mailaender will be exhibiting a cross-section of works. From imagery printed on found ceramics and Italian lava stone, using an extremely durable process created for photographs to be printed on gravestones, to his series ‘Skin Memories’ in which he has developed techniques for printing on leather during a residency at LVMH Métiers d’Art, the exhibition will be extensive and take place over multiple floors of the space in Chelsea. Also on show for the first time will be a selection from the artist’s personal collection of objets trouvés “The Fun Archeology”. Continuing in the theme of his work, the “Fun Archeology” is a celebration of the bizarre, full of strange and wonderful objects, such as Algerian propaganda movies or minuscule souvenirs and an extensive photo book collection.

Thomas Mailaender’s work is held in public collections worldwide such as the Musée National de l’histoire de l’Immigration, Paris, FNAC (Fond National d’Art Contemporain), Paris and MONA museum, Tasmania. He has exhibited widely in exhibitions such as ‘Do Disturb’ (Palais de Tokyo in Paris, 2017), “Iconoclasts: Art Out of the Mainstream” (Saatchi gallery, London, 2017), Performing for the Camera (Tate Modern, 2016), ‘Night Climbers of Cambridge’ (Festival Images in Vevey, Switzerland, 2014), ‘From Here On’ (the Rencontres d’Arles, South of France, 2011), Paris Photo, and will be exhibiting in the ‘Back to the Future’ show at FOAM museum in Amsterdam in the coming year (19 January – 28 March 2018). Thomas’ curatorial work includes ‘Hara Kiri’ (Rencontres d’Arles 2016) and Photo Pleasure Palace with Erik Kessels (Unseen, Amsterdam, 2017). Numerous Artist books have been published about Mailaender’s work and his “Illustrated People” (AMC/RVB books) was awarded PhotoBook of the Year in the 2015 edition of the Aperture Foundation PhotoBook Awards.
.
.
.
.
.
.
.
.
source:bjponlinecom
A “compulsive collector of photographs”, Thomas Mailaender raids the internet, car boot sales, and flea markets to find source materials for his wayward art. His work is currently on show at Michael Hoppen, and he’s signing copies of his book at Photo London

Known for his offbeat experiments with printing processes, Thomas Mailaender is an artist constantly pushing the limits of the medium. He’s worked with found images for 10 years and, as a consequence, tells me that: “I don’t think of myself as a photographer.”

Often sourcing images from the internet, but equally happy to raid car boot fairs, flea markets, and charity shops, Mailaender says he is interested in “reproducing images rather than making them myself”. He is, he says, “a compulsive collector of photographs”.

A selection of his work is currently on show at the Michael Hoppen Gallery in Chelsea, London; a combination of previously seen and unseen work, it includes a selection of ‘objets trouvés’ from his personal collection, the so-called Fun Archive – a collection of absurd, amateur photographs Mailaender started gathering from the internet in 2000. Once Mailaender selects images from the archive he decontextualises them, and prints them onto new surfaces and materials, creating mordant tributes to, and comments on, contemporary culture.

Mailaender is unsure of how his ideas come about, saying that they seem to be continuous, in the sense that one project leads to another. And while each work is different there’s a strong thread running through them – Mainlander’s interest in process, in pairing traditional techniques with today’s prolific digital visual culture. “I’m passionate with process,” he says. “It’s nice to return to the process, rather than spend time on the computer.”

“Right now, I’m feeling upset with the internet,” he continues. “I have the feeling that we are overloaded with images and information, and I am kind of nostalgic about the pre-internet era.” Paradoxically, he says this sense only feeds his obsession with building his fun Archive, in a bid to create a more material, more permanent archive of imagery.

Recently, Mailaender collaborated with a funeral craftsman to print images onto ceramic and lava stones, a durable technique mainly used for printing photos onto tombstones. It’s a permanent process, he notes, which manifests the image in such a way that it will never fade away. By contrast, he says, “in our age, images are mostly stored on hard drives and at some point they will disappear”.
.
.
.
.
.
.
.
.
source:michaelhoppengallerycom
Thomas Mailaender (born 1979) is a French multimedia artist living and working between Paris and Marseille. Known for his use of a wide range of techniques including ceramic, photography, collage and installation, he employs diverse materials, often re-appropriating images from the internet or his own huge archive. One of Mailaender’s attributes is his ingenuity and ability to conceive curious and creative exhibitions using everyday materials and his curated shows teem with humour and originality.

Thomas, along with Eric Kessels, curated Photo Pleasure Palace, an exhibition in conjunction with Unseen Photography fair in Amsterdam. Both artists are compulsive collectors of photographs and keen observers of sociological patters. Additionally, they both take the absurd and ridiculous very very seriously. Kessels and Mailaender welcome you to their weird-and-wonderland, a place where pleasure is guaranteed and photos are in imminent danger.