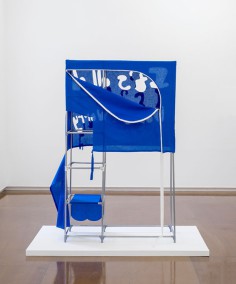 source:moussemagazineit
Titles in her work groups are often borrowed from other structural environments in society. The internal structures inherent to them are imitated or modified in a similar way to how the sculptures are treated, transformed from the original, to support the abstract visual narrative.

References to clothing draw upon the exhibition’s theme of the body. In conjunction Scheepers’ materials imitate physical and psychological gestures or postures like being tired, falling apart, having an expression – almost like material ‘actors’ in a narrative. In this sense there is an idea of a performative whole in the exhibition though all works act both in combination with each other as well as alone.

The physical and psychological spaces around people and the body as address for the tensions that arise from them, informs the tensions and narratives within her work. Forming part of a simultaneously gestural, physical and formally methodized process,

Scheepers’ relation to materials and the studio is also very much the foundation of her finalised pieces. These works often show their making and notes for making, with gesture, motif and method merged as one layer.

There is often a shifting of roles amongst her many references such as architecture, television, films, furniture and clothing, referencing within them the everyday. Here she continues this part of her process, by including the mundane objects of a generic everyday (in this instance the lo-fi aesthetic of an instant garment closet) and explicitly referencing ‘a body’ (indeed one work here is a depiction of the digestive system).
.
.
.
.
.
.
.
.
source:artmagcouk
Mary Mary is delighted to present Gerda Scheepers’ fourth solo exhibition at the gallery. Drawing on various bodies of work spanning the last fifteen years, starting with her early furniture sculptures from 2004, this exhibition of new work brings together both wall and floor based pieces. Painting is an important reference point throughout the exhibition, though the formal elements of such are shifted and abstracted, with sculptural tools and working methods replacing that of brushes and paint.

Through Scheepers’ methodised application of her materials; painting with pieces of fabric, a pair of scissors and familiar forms, she has created a pathway back to painting through sculptural means. A pair of colourful wall works that resemble soft, unlikely shelves are simultaneously abstract paintings. Similarly ambiguous, another work acts like either a window blind that rolled in a possible pictorial message, or a painting that quit and became a roller blind. In the ‘Pillow Riley’ series (art historical references in the works are both explicit aswell as being ”just part of the furniture”) the typical piping edge used to accentuate edges in upholstery finds itself posing as a frame to a canvas before drifting and hanging off the edge; a disobedient border.

Scheepers work has much of its focus in formal approaches to medium and relations to sculpture and painting. The works are hybrids; at once pictorial surface, object and ultimately performative. Gestures are hinted at by a material physicality, as well as a strong nod to the figurative and bodily forms, the works acting as performer, stage and set.

Her use of figuration, though always pared down and minimal is even more reduced here. Still present, the references have become more abstracted, conveying themselves more through association and common familiarity. The predominant materials are predyed cottons or fabrics associated with casual wear, with forms partly resulting from re-issued studio leftovers or an arm rest separated from its couch-body. They make for a form and colour palette that is deliberately part choice and part a result of availability, allowing for compositional possibilities that mimick a partially unchosen shared environment, similar to that of a neighbourhood or a family.

These are keen references to the theme of the individual in relation to both private and public domains, which runs throughout Scheepers’ practice. The shadow of the body, references to clothing, furniture, domesticity and architecture lead us to depictions of the tone and atmosphere of the everyday and it’s politics, through Scheepers’ lens.

All of the standing works in the two rooms are made up of the rods of ‘instant garment closets’. In one, titled Maintenance, a thigh-height cuboid has a black fabric covering, unzipped at the side and with a part of it hanging off. A large blue thick plastic bag is set in it, and pursed into a pucker. Heft, bulk and convulsing are suggested, but it could also pass as a biohazard bin.

Scheepers makes for moments of incongruous drooping and unexpected convex forms so that in even the most boring consumer spacesavers, there’s an abject bodiliness. Curving bubble text is cut into the fabric covering of one of the travel wardrobes in the second room. ‘It’s all ok. Don’t worry,’ it reads, with its remainders still attached like peelings, undermining its own assurances.

In an identical structure, a rectangle has been cut out of its covering, bordered by a strip at the bottom that loses its tautness and bends. When the material gives way there’s a familiar tugging gravity, and the cut sections fold over themselves weightily, their plastic skeletons made an important feature. Almost made to ooze out from all the readymade parts and graphic aesthetic of Body Corporate, there’s a delicate but distinct luxuriating in the mess of viscera and bodily functions.