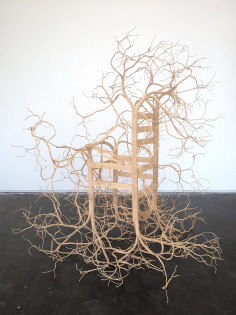 source:pontuswillforscom
I create sculptural works that challenge the assumptions we impose upon everyday objects and materials. I often co-opt the utility and materiality of domestic forms, transforming things like tables and chairs, all crafted by hand, into wild, ornate, lyrical compositions or evacuating these objects of their use by reductively distilling them into formal minimalist constructs. By connecting the controlled, functional nature of household products to their unruly, natural sources or by channeling the very simplicity of the culturally-charged meanings they’ve accrued beyond their empirical worth, I encourages the viewer to reconsider the sources of “known”.

Pontus Willfors was born in Sweden but live and work in Los Angels since 2005. He graduated from CalArts in 2009. He has shown his work at galleries and museums domestically and internationally, including Dallas, Houston, Miami, Los Angeles, Berlin, Rotterdam and Vancouver. His work can be found in multiple public and private art collections, including the West Collection and the Beth DeWoody collection. He is represented by DENK Gallery.
.
.
.
.
.
.
.
source:thisiscolossalcom
Through his sculptural practice, artist Pontus Willfors says that he seeks to examine “aspects of nature that are viewed by our society as product, nuisance or waste.” One of his frequently recurring motifs is the form of tree branches and root systems that sprout from from everyday objects as seen in this collection of furniture pieces that remind us explicitly of the material’s origins.

Willfors was born in Sweden and now lives and works in LA. These sculptures and several other artworks were on view as part of his exhibition titled Homeland at Edward Cella Art+Architecture in 2015. (via iGNANT)
.
.
.
.
.
.
.
source:chairblogeu
Pontus Willfors
Swedish Artist Pontus Willfors is based in California and had an exhibition at Edward Cella Art & Architecture Gallery in Culver City “Homeland” in June 2015. There he showed inter alia his “Chairs” that he gave branches and roots.

Pontus Willfors challenges the way the viewer perceives everyday objects. He examines aspects of nature that are viewed by our society as product, nuisance or waste. Through mostly sculptural exercises he addresses the power of our culture and its ability to manipulate nature and shape its surroundings.

He has shown his work throughout the continental U.S. including Ben Maltz Gallery at Otis in Los Angeles, Irvine Fine Arts Center, Read Contemporary in Dallas and was part of the curatorial show at Art Miami in 2012.