P_wall (the self-organization of material) 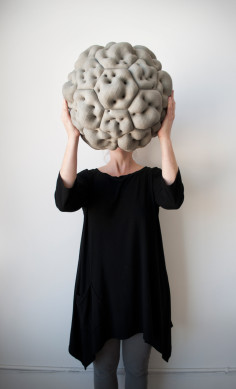 P_Wall (2009) was commissioned by the SFMOMA Architecture and Design Curator Henry Urbach for the exhibition Sensate: Bodies and Design. The wall, part of a series started with P_Wall (2006), is an evolution of the earlier work exploring the self-organization of material under force. Using nylon fabric and wooden dowels as form-work, the weight of the liquid plaster slurry causes the fabric to sag, expand, and wrinkle.

From the exhibition text written by Henry Urbach:

Andrew Kudless’s P_Wall, commissioned by SFMOMA for this exhibition and its permanent collection, marks a radical reinvention of the gallery wall. Typically smooth, firm, regular and, by convention, “neutral,” the gallery wall has shed its secondary status to become a protagonist in the space it lines. Made of one hundred fifty cast plaster tiles — individually formed by pouring plaster over nylon stretched atop wooden dowels — the new wall possesses an unmistakable corporeal quality. Bulges and crevices; love handles and cleavage; folds, pockmarks, and creases: these are among the characteristics of human skin that come to the fore. Contemporary in its effort to capture dynamic forces in static form, P_Wall nonetheless has its origins in the experiments of earlier, 20th century architects including Antoní Gaudí and Miguel Fisác, both of whom investigated the potential of cast material to yield unique, sensual and, at times, bizarre shapes. P_Wall replaces the modern gallery wall with an unwieldy skin that can only approximate the fleshy enclosure that we, as human beings, inhabit throughout the course of our lives.
.
.
.
.
.
.
.
source: ornamentalplasterblogspot

Hyde Park has undergone an exciting collaboration with a vibrant, Young architecture firm in New York whereby we have been challenged to create a series of plaster mouldings utilizing method and technique hitherto unexplored – unthought of, really! We look forward to sharing more details with our readership once the project is completed and published. It is sure to intrigue!

In the process of researching and developing this project, our eyes to other fascinatingly haute applications of architectural plaster. Our medium is most often viewed Classical context, and appropriately so. Yet, an adventurous mind can find a plethora of suitable and sublime uses for plaster within a modern context.

As we have begun to dip our toe into this pool of wonders, we continually find many diverse examples of how this concept is carried out. One such example is the much-published “P-Wall”, a permanent display at the San Francisco Museum of Modern Art. If you keep an eye to publications of modern art and architecture, you may be acquainted with its image:
What a captivating visual effect! For obvious reasons, plaster composition instantly garners our attention. Our collective imagination cries out, “How?”

First, the layout for the design was determined by plotting out points on a hexagonal grid, like so:

Each hexagon therein represents the individual plaster tiles that comprise the composition. Each hexagonal tile is made in its own wooden framework. The face of the mould is composed of elastic fabric, into which plaster is poured. Within each hexagon, the interconnecting points represent wooden dowels that are propped up below the face of the fabric mould surface, thereby creating the undulating puckers that drive the visual interest of the pieces.

The process is further explained here in an interview with the Artist:

Although we continue to primarily identify ourselves with Classical work, our love of plaster as a medium for artistic expression is hugely gratified by such creative exploits as “P-Wall”, and we feel inspired to tip our cap to innovators such as this, whose work helps to ensure that plastering maintains cultural relevance as something more than an anachronism. It is by works such as this that plaster asserts itself as an important and viable material, versatile enough to take the form of modern taste.
.
.
.
.
.
.
.
source: carlesfausblogspot

This project investigates the self-organization of two materials, plaster and elastic fabric, to produce evocative visual and acoustic effects. Inspired by the work of the Spanish architect Miguel Fisac and his experiments with flexible concrete formwork in the 1960-70s, p_wall attempts to continue this line of research and add to it the ability to generate larger and more differentiated patterns. Starting from an image, a cloud of points is generated based on the image’s grayscale values. These points are then used to mark the positions of dowels which constrain the elasticity in the fabric formwork. Plaster is then poured into the mould and the fabric expands under the weight of the plaster. The resultant plaster tile has a certain resonance with the body as it sags, expands, and stretches in its own relationship with gravity and structure. Assembled into a larger surface, a pattern emerges between the initial image’s grayscale tones and the shadows produced by the wall.